My brother-in-laws have a thing going on with the annual Anchor Steam Christmas Ale that comes out every year.  And I've posted a little bit about the bottles each year.  This year, the beer was billed as:  "New tree. New recipe. Same holiday tradition."  Nat's brother Charlie tells me that they have a new head brewer - hence the changes.  He also said that this year is heavier (is that the right term?) alcohol.

But, I'm mostly interested in the label.  Here's a look - below - at one of the bottles that Nat's Dad bought and stored for her brothers when they can make it.  They have a beer from every year back a number of years in this fridge. 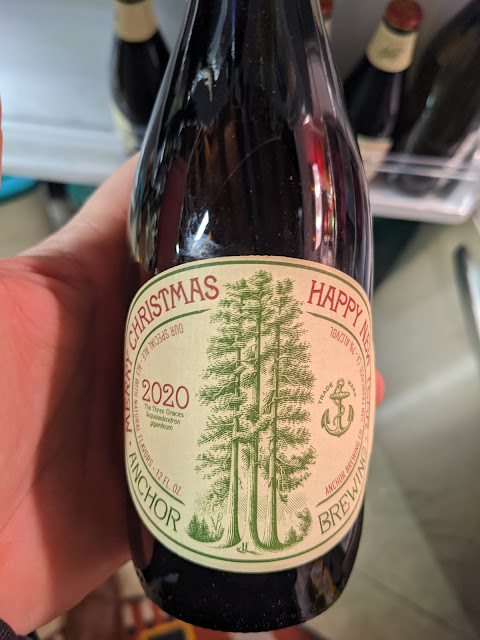 This year’s label features The Three Graces; three iconic towering sequoias from the Mariposa Grove in California’s Yosemite National Park. This is only the second time in its 46-year history that multiple trees are shown together on the label, a fitting statement to symbolize togetherness and hope in a year when so much time has been spent apart. The Three Graces represent radiance, joy, and flowering – characteristics that we can all hold near during this unprecedented time.

This marks the seventh year that I've included this holiday tradition on the blog.