Yesterday, I shared a photo of a newly cropped small fern that I tried to bring inside this Fall and promptly neglected.  I mentioned that I repotted it, fed it and the lopped off the dead stuff.  I've put it out on the screened porch in the hopes that between the moderate temperatures, the higher humidity (than inside) and the light, it will recover with some new growth.

In that post, I mentioned that this fern was the second transplant project from outside with the first one being successful.  Hence, me thinking I could revive the fern in the same way.

*That* first successful transplant was a Wire Vine plant. (or Angel Vine). It is named Muehlenbeckia complexa and Nat had it out in one of our planters on our front porch this Summer.  We dug it up, transplanted it and...mostly forgot about it.  I noticed it was stressed, so I transplanted it, gave it some composted manure, watered it pretty good and gave it a haircut.  I lop'd off all of the shoots that were bare and cut almost all of it back to about three inches off the crown.
Three weeks later, the thing seems to be quite happy. 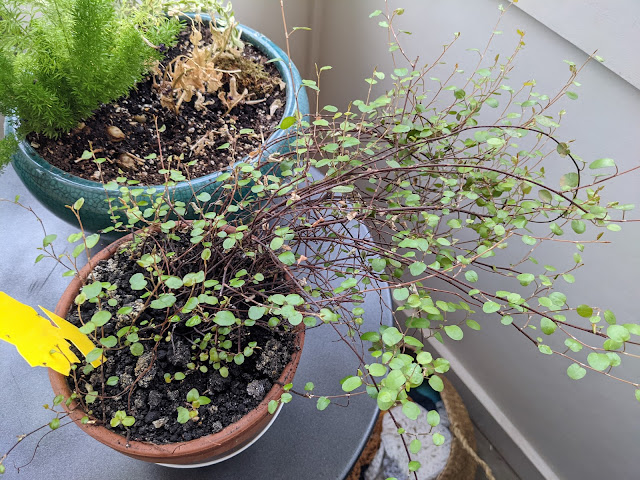 There is new growth all over including at the very ends of some of the longer tips.  See below for the newly emerged foliage. 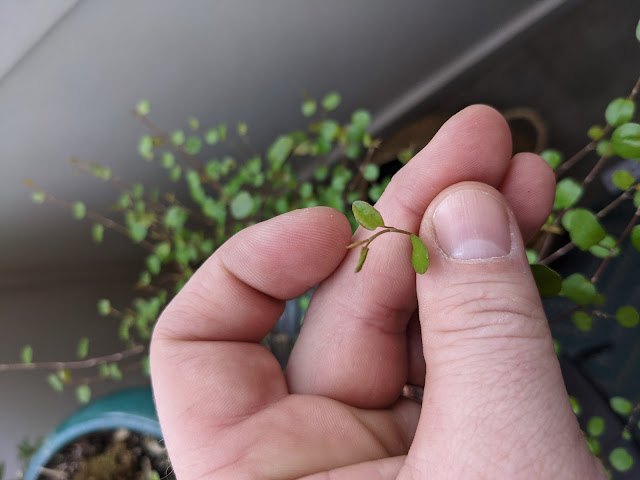 This is a real vine - so it is trailing in habit - which means that I'm not totally sure how long we can let this thing get. The table it is on in the screened porch is an 'end table', so it is only like 32 inches from the floor.   For now, I'll let it grow.  But...Im thinking we'll keep it going until Spring when we can put it back outside and perhaps even divide it up so we can have part on containers outside and keep part in the porch.
container gardening garden diary potted plants screened porch vines winter gardening