Limelight Hydrangeas - Early Spring Pruning - Before and After - April 2021

We have a pair of Limelight Hydrangeas that are set just to the south of the front edge of our front porch.  They're kind of tucked on the side of the house - right at the 'wrap-around' section of the 'wrap around porch'.  They've done remarkably well - better than other hydrangeas we have right in front of the porch.

Last year, I confirmed (to myself) that Limelight Hydrangeas bloom on 'new wood'.  Which means, I can prune them back pretty hard and they'll still flower.  Here's what they looked like last Spring after a prune and recovered with new green growth.  You can see that I cut them down to below the deck boards in early 2020.

As part of my startup process in and around the beds, pruning the hydrangeas has become part of the tasks that I can do during these in-between weeks - where it is still kinda cold, but days are warm.

Here, below, is the before (top) and after (bottom) of this pair of Limelight Hydrangeas after pruning back. 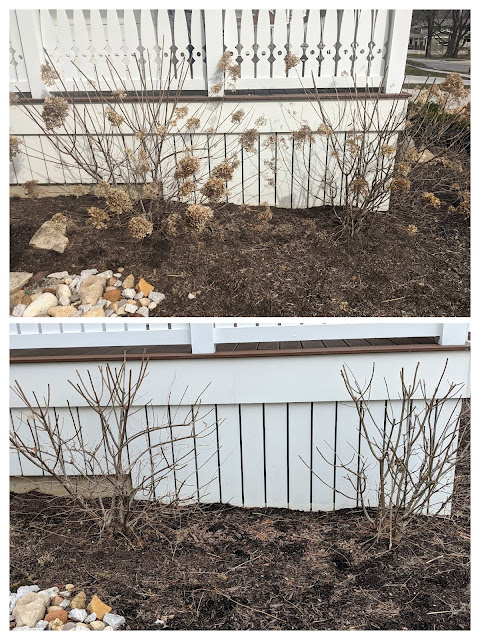 The "before" version isn't true to their final form last season.  Nat likes to hang swags of garland on our porch, so I took out the bypass pruners and lop'd off the heads of these in November so they wouldn't get in the view of the garland.  But, the "after" version shows where I ended up height and width-wise.  I pruned them back to (once again) the deck boards.  I also thinned out a bunch of stuff and tightened them in from the sides and front.
I'll grab a shot of these later this Summer to document how much growth they put on between now and bloom-time.
flowering shrubs flowers front porch front yard garden diary hydrangeas limelight hydrangeas pruning side yard spring clean up
Location: Downers Grove, IL, USA