Back in March, I decided that one of the projects that we wanted to take on this season was the creation of clean, new, swooping bed edges in our backyard.  And, in order to figure out what I needed to do - and by who - I created a simple order of operations list of the steps as I see them.

Step one:  pick up the Automower boundary and guide wire that rings the perimeter of our backyard.  I started on that project recently and have made some progress.  Here, below, is about 40% of the backyard boundary wire that I've pulled up out of the grass and collected the spikes that hold it in place. 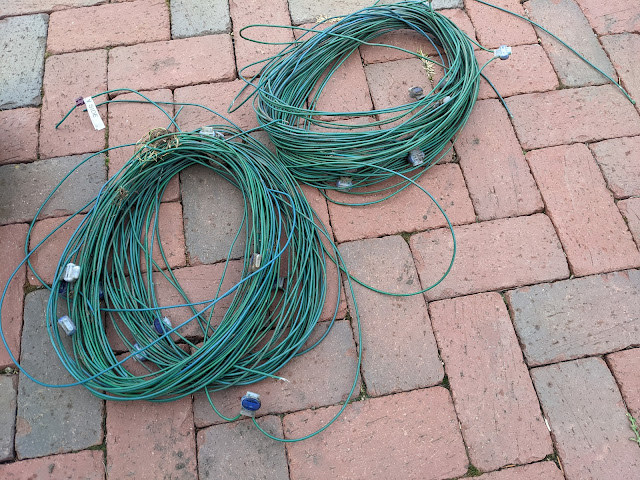 This set of wire is littered with those little pigtail plugs that connect the wire in various places that it has severed over the years.  This section of the wire has been picked up and reset various times over the years, so it wasn't that hard to pull up.  There are other parts (the remaining 60%) that hasn't moved since I put it in initially back in 2017, so it is buried in the thatch and thus, more difficult to remove.

As for the guide wire - which is the wire that runs from the far back of the yard all the way up to the dock straight down the middle of the yard - is one of those wires that I have not moved one bit since the initially installation.  That means that it is almost buried under the thatch.  So, it was a struggle to remove.

Here's where I've settled on one end:  I cut the connection from the boundary wire and yanked it up out of the grass for about twenty-five feet.  And then wound it around a yellow tent stake that I put in the middle section of the lawn.  Below, you can see the line that was caused by pulling the wire and how I wound it around the stake: 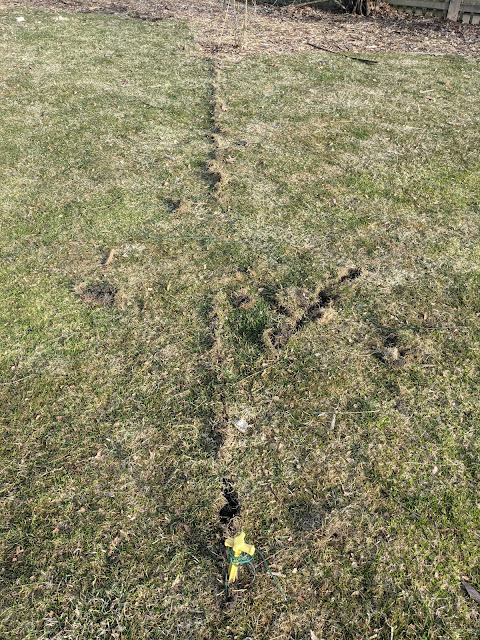 I decided to just leave this guide wire in for the bulk of the yard because of two things:  first...it was tough getting it out of the thatch.  And, second, it is creating quite a bit of damage to the turf.  In this section, the grass is ratty, but closer up to the house, I have solid KBG and want to limit the damage.

As for the balance of the items in the order of operations on this project, I can now move on to #2 and #3:  move the stuff that is scattered around the yard and in the way and...bring in the professionals to extend the beds.

Once that's done, it is time to clean up, prune, remove, transplant, dig-in and plant new items, re-edge the beds and put the wire back down, weed/feed and finally...mulch.  That's a lot to get done in April.