Back during quarantine (Spring/Summer of 2020), I bought eight very inexpensive apple trees and planted them about two feet apart along our fence.  Then, I proceeded to lop them them off at about 24" from the ground and hoped for the best.  They all seemed to throw off some new buds and I thought that maybe they'd all do fine.  I wired them up by mid-Summer and saw some new growth.    But, by August, I had three trees that had died.

But, I looked here to see the list of Honeycrisp pollinators and...ummm...I don't see Golden or Yellow Delicious trees listed there.  Lots of trees listed, but not those.  Most of the trees listed seem like rare/heirloom cultivars and not something I normally see on the $10 "special buy" pallet at the local big box store.

However...there is a note on that page of pollinators from Orange Pippin Trees that says this:

"Most white-blossom crab-apples will also be good pollinators for this variety."

Now we are talking.  I've been thinking about a crab apple tree or two and know they make nice espalier trees due to their flowering.  But, I haven't bought one because of my experience in Elmhurst.

Back at our first house, we inherited a mature crabapple tree in our backyard.  It was what you normally find in crabapple trees:  put on an incredible show of color in the Spring.  But, dropped a lot of leaves early, had lots of spots on the leaves and seemed to put up A LOT of water spouts.   It kind of soured me on crabapples in general.

But, I started to do a little bit of research.  And, it turns out that A LOT of crabapple trees are susceptible to various diseases.  Things like apple scab, fire blight and cedar rust are common problems for lots of crabs.  Knowing what I know now, our old crabapple tree was suffering from one or more of those things.  It still put on a show, but the tree was in decline.

Over the years, nurseries have begun to breed more hardy and disease resistant crabapple trees.  Some are more resistant to scab.  Some to blight.  And some to both.

When I was at the orange big box store recently, I found some crabapple trees on 'special buy'.  They had a bunch of Robinsons, some Royalty Purple and something called a Harvest Gold 'Hargozam'. 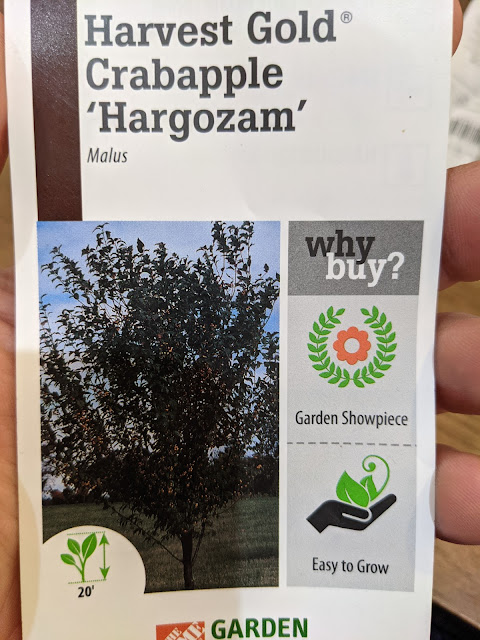 I went to the Wisconsin list and sure enough....Hargozam is one of their recommended trees for being disease resistant and labeled a 'Proven Performer": 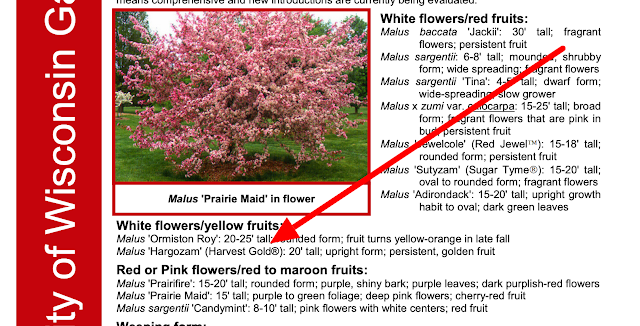 I need three new trees to complete my Belgian Fence and replace the dead ones, but Home Depot only had two of these trees - and they were the only ones on the list.  So, I bought two.  One straight-as-an-arrow one for the end.  And a leggy one for the middle.

Here, below, is the straight one.  A little pruning and it will be just fine. 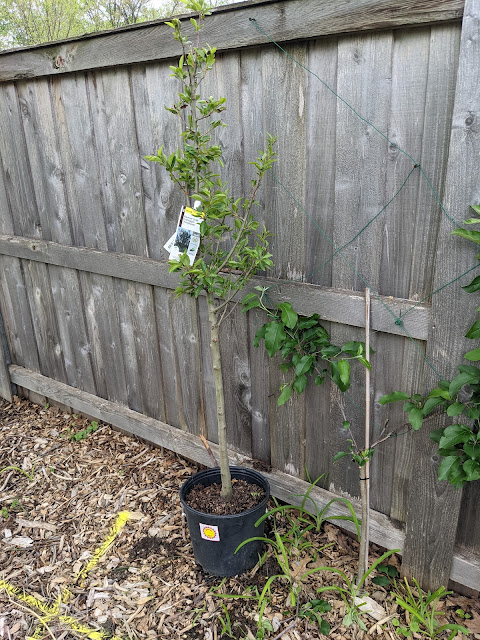 And here, below, is the crooked one going into the #6 slot. 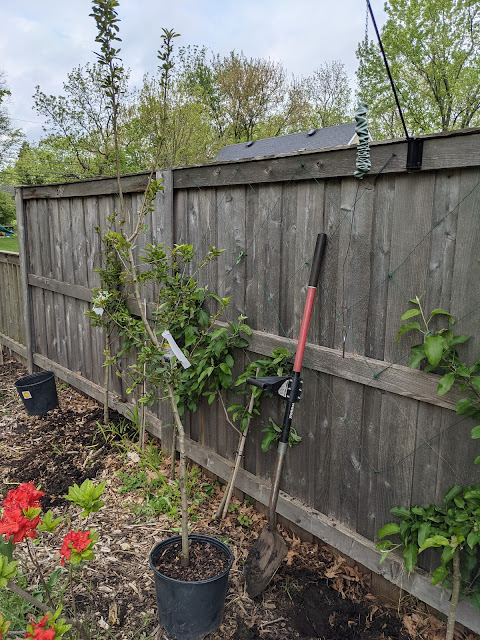 The advice is to give these a hard prune VERY early in the season - like before they break bud, but since we're well past that, I figured I should act fast and just lop the top right off.  But, I lost my courage and cut the tree too tall - leaving a couple of limbs in tact.  I did make a couple of incisions right above buds that are at the right level in hopes that they'll push out some new growth.  Worst case, I can (I think), make one of these existing limbs *work* despite it being a bit too high.  (Note:  I thought about planting the tree deeper, but was worried that doing so would certainly kill the tree.)

Here it is (below) planted but not pruned: 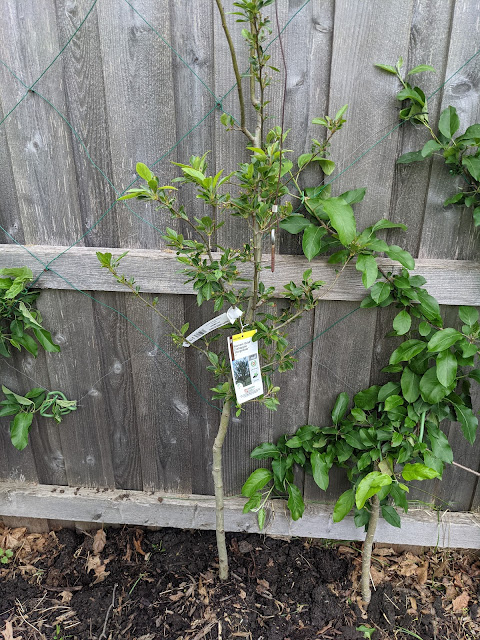 Here's how it looks after taking the top off (below): 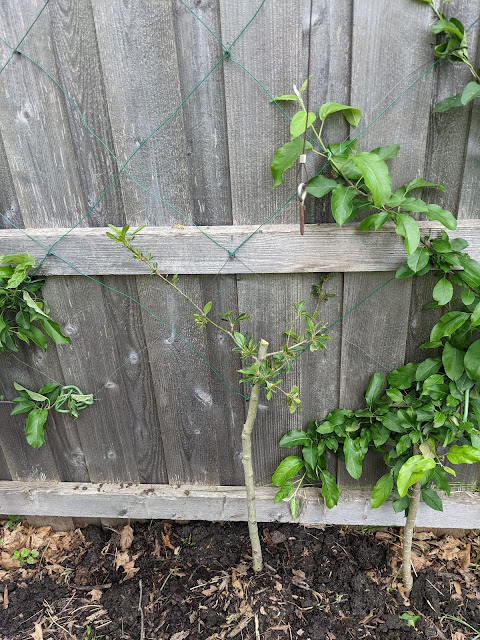