We have twelve clumps of Summer Beauty Allium (Allium angulosum 'Summer Beauty') in our backyard that were planted in 2020.  In two batches:  first a group of four, then eight more.  They're now placed in a colony of five and a colony of seven.  Odd numbers is what other gardeners always recommend. All of them have done well this year and I'm happy to see them about to burst open and put on their mid-Summer show.  They disappear over Winter, but put out this lovely dark green foliage that stays green at the tips.  Here's a look at them emerging from the mulch in late March of this year.

The drift of five is planted at the base of the Greenspire Linden horizontal cordon espalier - you can see them below.  The photo looks like there is four, but there's one behind #3 (from the left) in the back row against the fence.  Head here and scroll to the bottom of the post to see the original four plantings with one kind of 'behind' the others.  In the photo below, you can see that I added the fifth to the left of the previous four.  These flower tips are mostly upright with some of them tilting left. 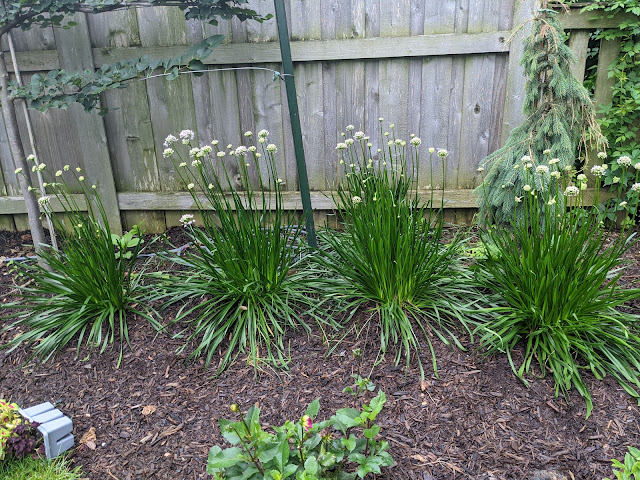 Now, have a look at the other seven Allium angulosum 'Summer Beauty' Ornamental Onions below.  These are planted further back in the yard - but on the same side and same bed.  These have *a lot* more tilt to them as I think the tips of the flowers are reaching towards the area where there's more sun. 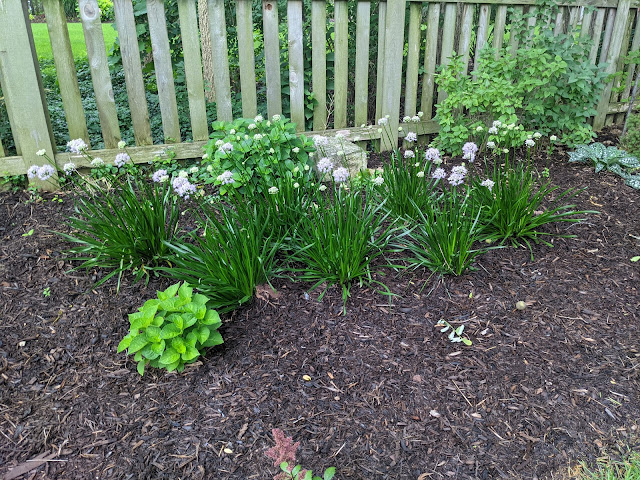 These perennials were planted here based on the plan that our landscape partner gave us for a fully planted set of beds.  When I started on my journey with our backyard, I knew next to nothing other than what I had bought/come across at the Big Box nurseries.  So, I put these in just based on the plan.  And, now...a year later?  I've grown to love them.  I want even more in various places, but I know they love full sun more than part sun, so I am limited in places I can put them.

I also (recently) found out that these very plants were discovered and brought to market by Roy Diblik of Northwind Perennial Farm in Wisconsin.  After stumbling on Roy on YouTube, I've become a fan (thanks to my other favorite online gardener - Erin the Impatient Gardener).  In one of his videos where he talks about 'coming to know some plants', he includes this story about finding and growing Summer Beauty Allium. (I've set this embed below to start from the Summer Beauty mention...but you will likely find joy in. the whole thing.)

Pretty neat, right? He *found* this variety in someone's yard?  Four years later, he had cultivated 14,000 per year.

What does he like about it?  Persistent green foliage.  Doesn't brown at the tips.  And doesn't reseed.  Check out this listing from the Lurie Garden site that mentions Roy finding this in a Chicago-area garden.

One other thing that I've learned from Roy in his YouTube videos is that we shouldn't be afraid to call plants what they're named - their forma Genus species name (like Allium angulosum).  Good tip - which I've reflected in the post title on this very post.