I don't think I've posted photos of our front porch container in the past here on the blog.  We've done a mix over the years of DIY and even one year Nat had a pro fill our container.  This year, I went to the big box nursery and picked out some shade-loving plants to use including a big, dramatic fern on the left.  Along with some coleus, a purple sweet potato vine and (although they're hard to see, they're there) a few peach-colored Rex Begonias. 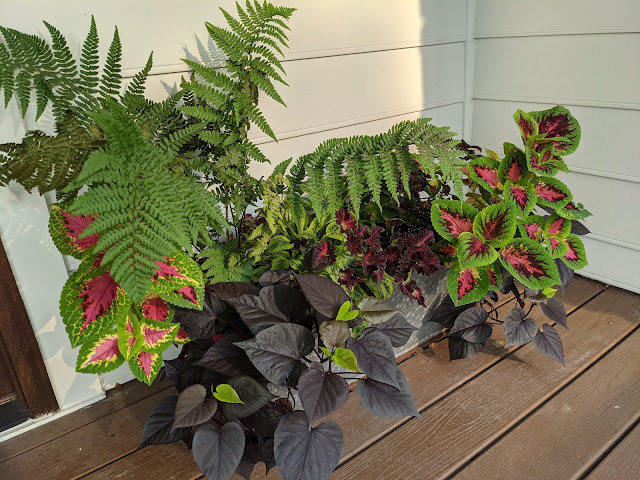 The Coleus is putting on a nice show and the vine is beginning to spill out a bit as the container hits its stride in the end of July.
I don't seem to have taken a photo of the tag for the fern, but I think it is a Cinnamon Fern.
Here's a look at the flowers before we planted them below.  The watermelon-striped plant and the Rex Begonias - which were the stunners pre-planting that you see below have been somewhat swallowed-up by everything else. 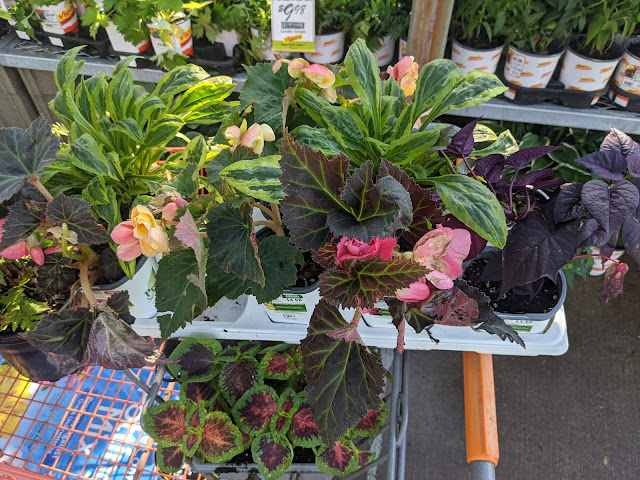 Our front porch gets some early morning sun, then is in deep shade for the balance of the day.  All of these selections are fit for shade and seem to be happy in the container.
I'll get out back and take some photos of the containers back there in the coming days.  One big missing piece of the puzzle are larger containers in our garden.  Ever since Nat banished the wine barrel planters that I used in early Summers in Downers Grove, I've been stuck with smaller containers we had on hand.  Here's what the patio looked like in 2018 - with those large (and cheap) wine barrel planters stuffed with annuals and a few vines.
annuals coleus container diary containers ferns front porch front porch container garden diary shade gardening sweet potato vine
Location: Downers Grove, IL, USA