Posted by Jake Parrillo on September 03, 2021
We have had an interesting growing season in terms of precipitation in our zone - USDA growing Zone 5b - in Northern Illinois.  I say 'interesting' because the Illinois State Climatologist has posted over the Summer on their blog and talk about a dry Spring/early Summer followed by a really wet period.  A few callouts from that post:

The first two-thirds of June was very dry across Illinois (Figure 5). In fact, the period between June 1 and 20 was the sixth and seventh driest on record in the northwest and northeast Illinois climate divisions, respectively.

Due to the very wet last 7 to 10 days of the month, June ended wetter than average in all but the northwest and southwest climate divisions, and it was the sixth wettest on record in the east-central division.

That 'really wet' period was great.  But, it was followed by another very dry period.  If you look at the US Drought Monitor from late August, you can see that our county (DuPage County) is in the "D0" category - "Abnormally Dry".

Here's a screenshot of that map: 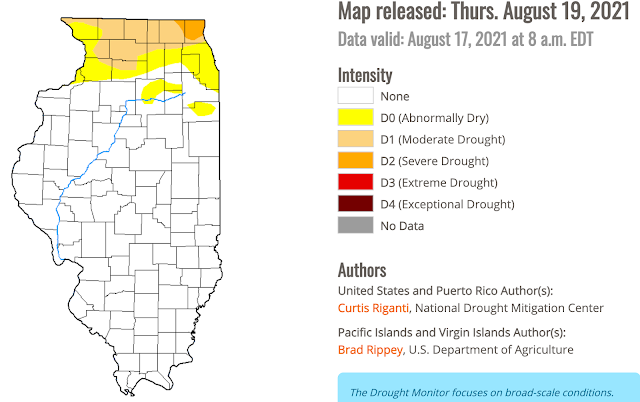 Why bring that up?  Because, we were away from our house for almost two weeks earlier this Summer.  I had some things set up on timers for irrigation, but one of the casualties to this dry weather appears to be our Weeping White Spruce tree. In July, I posted a photo showing how this tree has started to decline.  Loosing needles.  Turning brown.  I sprung into action and started to water the heck out of it.  Trying to save it.

Unfortunately...I'm standing here, at the beginning of September...totally unsure of the state of this tree.  Here, below, is how it looks right now.  Brown tips, lost needles.  But, has it gotten worse? 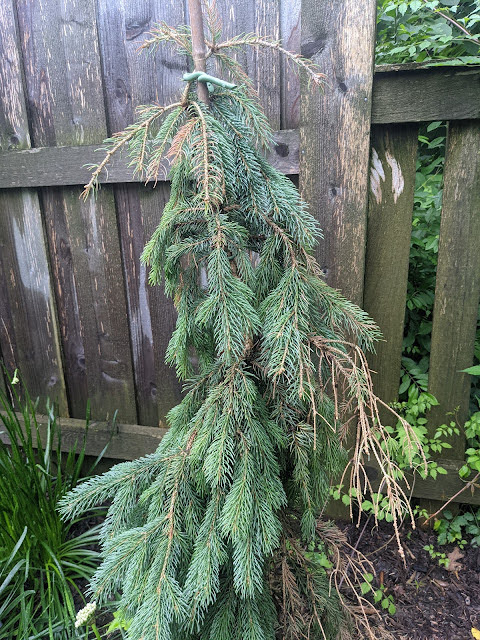 Looking back at the photo from late July, is it different?  Yes.  But, more dead?  I'm not sure.  Here, below, is a side-by-side.  Left is current day. Right is late-July. 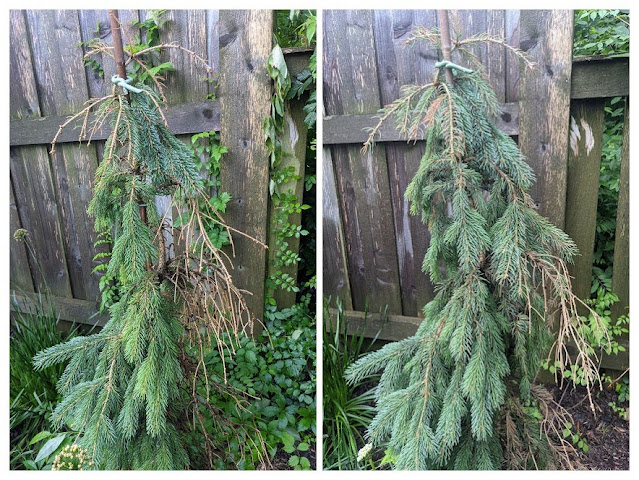 I'm going to keep watering it this Summer and Fall.  I know it has been setback, but I'm not sure it is lost. When I tug on the needles that remain, they stay put.  Good sign, right?
columnar tree conifer trees conifers decline drought evergreens garden diary tree diary trees weeping white spruce
Location: Downers Grove, IL, USA