Yesterday, I shared a couple of photos of the very young Japanese White Pine tree that has a ton of brown and orange needles.  The tree is either in severe decline and will be dead soon.  Or, it is going through a normal process of needle drop to get ready for some new Spring growth.  I have no idea.  I *do* know that the tree was stressed before I planted it and the cones were already present at the top - indicating that (I think) the tree was concerned for its own wellbeing, so it threw out a good crop of cones based on the size of the tree.

In that post, I mentioned that the small (and adjacent) Weeping White Spruce appears to have stabilized after suffering some heavy drought damage this Summer.  It seems like the needle loss has stopped and the remaining sections are green and well-connected.  I shared a mid-Summer update on this tree where you can see the needle loss, but when you compare the photos from September to now, it is clear that even more needles were dropped in the past five weeks.

Below, you can see the current state of the tree in the photo below: 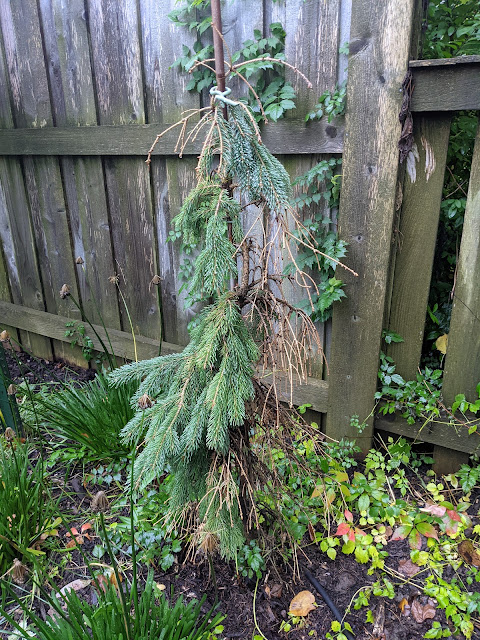 The 'back half' of the tree is (now) bare and has clearly died.  I'm going to do NOTHING to this tree for now.  But, come late Winter/Early Spring...I'm going to think pretty hard about doing some hard pruning to remove the dead stuff and see if I can encourage a flush of new growth to make this a little bit more well-rounded in terms of shape. I also think that I might need to identify and nurture a new leader - or apical meristem - to continue the tree's upward growth - which is exactly what I did *this* Spring.