We're coming up on my one-year anniversary of living with a Maidenhair Fern in our house.  I picked up a tiny one at Wannemaker's in February of 2021 and re-potted it into a larger clay pot.  If you go back and look at that original post, you can see that the fern was quite happy.  Feather-light and green.  A month later (March of 2021), it was thriving.  I seemed to have figured out how to keep it happy in terms of light and moisture and feeding.  After that post, I don't seem to have shared any further updates on the fern.  But, it has *been* a journey.  When people talk about Maidenhair Ferns being finicky, they're not lying.

During the life of this potted fern, I've kept it inside.  Either in our family room or screened porch.  And, it has been a series of ups and downs.  After that March post, I think I saw some decline.  Followed by me tending to it, watering it and feeding it.  Which lead to a period of happiness.  Then, typically followed by another cycle of decline --> care --> improvement.

Winter has not been kind on my Maidenhair fern as I had to bring it inside and expose it to the dry climate that our central heat produces.  Having taken a close look at it recently, I decided that maybe the soil wasn't doing the plant enough service.  So, I dug the fern clump up and replaced the soil.  Hoping for a little bit more nutrient pickup and water retention.  Here's what it looks like about a week post-re-potting: 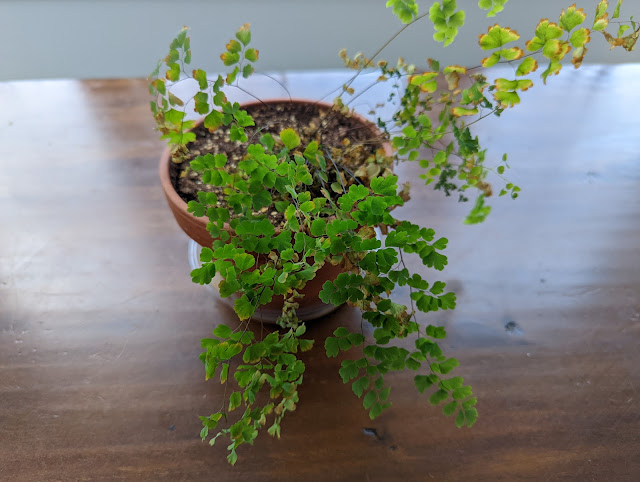 There's PLENTY there still to like.  Lots of green.  And...sure some browns.  But, that is fixable, I think.   I also THINK that I'm seeing some new, tender growth at the crown.  Below is a closeup of those new fronds that have emerged since the re-potting. 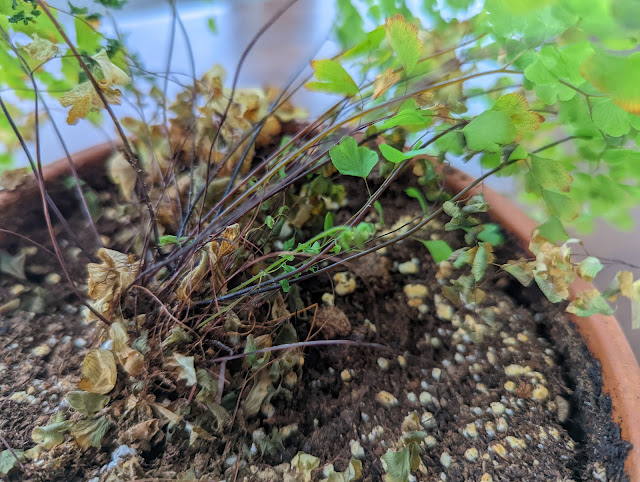 Doing a little bit of research on the Web, I think I've come across a potential solution to my finicky Maidenhair Fern: Giving it a new home.  I have something that could work on hand, but I haven't used it for a couple of years.  More on that this week.
container diary container gardening containers ferns garden diary indoor gardening maidenhair fern potted ferns potted plants repotting soil transplanting
Location: Downers Grove, IL, USA