Back in November, I posted a photo of what I called a pair of "underutilized" Disney MagicBands.  I wrote about how they weren't able to "live their best life" because our trip was cut short.  In a post a week earlier where I posted a photo of Pooh Bear as a 50th Anniversary statue, I talked about how we didn't see too many of those statues due to "unforeseen circumstances".  But, in those posts, I didn't really talk about what we *did* do on our trip.  Besides going to a couple of parks and having some good drinks at my favorite restaurant on Disney property (more on that in a different post, I think), Nat and I were down there for the Run Disney Wine & Dine Race Weekend.

Both Nat and I were set to run the 5K, but she was also running another, much longer race.  I was happy to just do the 5K.  Here, below is my bib. 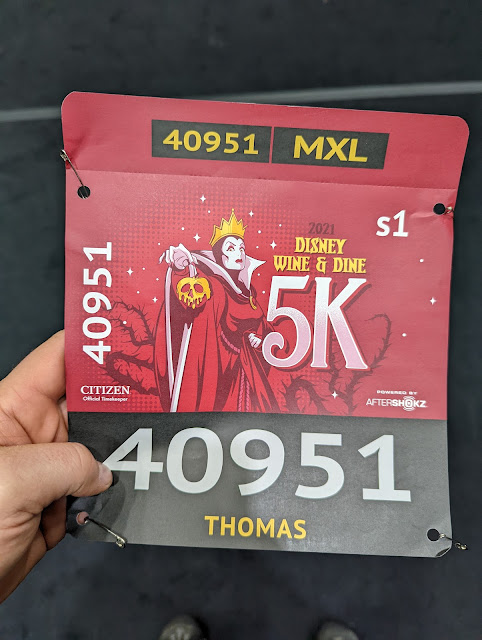 Our race started in the rain and thankfully we had ponchos.  We stood out there for a couple of hours, waiting in the corrals (like one does at a big race) and then, when it was our time to get to the starting line, we started running.  Unfortunately...for some reason....there were TONS of walkers ahead of us.  We were in the 2nd corral.  Not the elite group.  But, the first real big group.  I'm not sure why there were so many walkers ahead of us, but it made the first mile or so pretty difficult.  We intended to run the whole thing and the first mile or so was on a mix of 2-lane roads and some narrower paths, so it was a lot of bob'ing and weaving to get thru the 3/4-abreast groups of walkers.

The 5K is something that (I think) a lot of the longer distance runners might skip.  They have a 2-course challenge that includes just the 10K and the half marathon.  I'm good with that and really had a nice run around Epcot.  We started in the parking lot, ran backstage and came out around Test Track.  From there, we ran around the World Showcase - and even caught our first/only glimpse of the expanded France Pavillion - before circling past Spaceship Earth and back out to the Epcot parking lot.  Then, some peel-top cheese and chips (which...Nat tells me is a *thing*) and a snooze at the Wilderness Lodge.

Before...the scramble that I've alluded to at the very top of this post that started with a call from the School nurse about COVID.