I have just recently (in the past three-or-so months) started to utilize hot giardiniera on my bar pies.  Here's a photo of my "Nice Cups" pepperoni pizza that is half-topped with olive-free hot giardiniera.  A funny thing has happened with my ability to handle hot/spicy foods recently - my tolerance has dropped significantly.  But, in an interesting coincidence, Nat's tolerance has only grown.  So, I've gone from "extra hot peppers" at Potbelly's to "light hot peppers".  With that going on, I mostly make my giardiniera pizzas for a crowd and not ones that we eat at home by ourselves, but I still want to take the time to get my utilization dialed in.  Here, below, is a photo of the latest tip that I picked up:  draining the giardiniera in a colander to remove the excess oil. 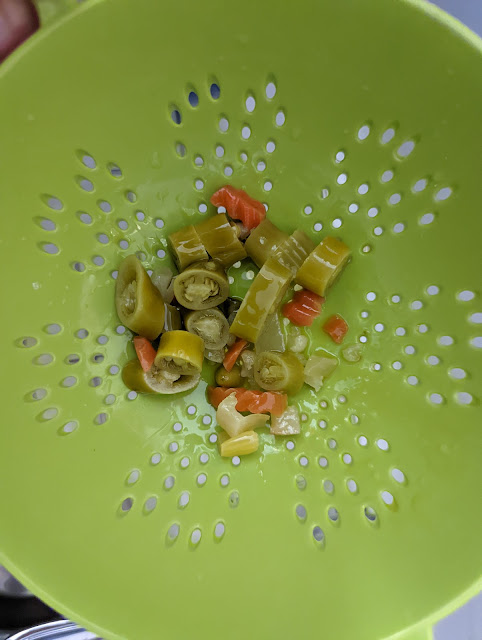 I mean...the idea is simple and logical.  In order to control the top-oil level, the right thing to do is to remove as much of the giardiniera oil as possible.  But, I suppose...I never really thought of it.  I've mostly used the:  grab a spoon and pin the veg against the side of the jar and let the excess oil fall away method.

The post shows off a corner of one of his pies with a fennel-heavy sausage and giardiniera.  But, in the comments, someone asked him what was his "giardiniera protocol"?
His response: "Really well drained in a strainer (I save the oil for other stuff) and on top beneath extra parm."
That was an 'a ha moment' for me.  Now I drain my peppers.
I think of it like using a product like Crisco/lard around the rim of a pan pizza to create a sort of 'paste' to keep the skin from pulling back.  This is another pizza-making tip that I've picked up from the community that will make my own pies *just* a little bit better.
chicago pizza chicago thin Giardiniera instagram pizza pizza making
Location: Downers Grove, IL, USA