Posted by Jake Parrillo on February 17, 2022
Over the years, I've written a few times about the Chicago Athletic Association. It is NOW (or...I suppose when I say "now", I really mean pre-COVID because I haven't been anywhere near the CAA for a couple of years) a hip, boutique hotel with a great rooftop bar (Cindy's) and a cool lobby-adjacent bar and gameroom.

But, that's the place's second life. The first life was as the real-deal Chicago Athletic Association. A membership-based club like the Union League or University Club. Old-school.

It also was the place where my oldest sister was married. All the way back when I was in high school.

I also was invited to have a few lunches there from Tom Roeser back in the aughts. Was always a lot of fun to hear Tom tell stories.

Years after that, the club failed.  I think the membership aged out, the value of the real estate was too high and they couldn't make it work.

But, it was always a place that was on my radar.  And, because it was around for SO MANY YEARS, a bunch of items from the CAA are in circulation.  You can find them at Estate Sales and garage sales around the suburbs and every time I see something, I throw out my collecting mantra and gobble the stuff up.  Why?  Because that mantra doesn't apply to gifts.

I've bought various items over the years.  A dinner plate.  A creamer.  A spoon.  But, recently, I found something else that I knew would make a great gift to my brother-in-law:  this Cherry Circle Cigar Box.

It is wood, has a couple of metal latches on the front and has the Circle-C logo on top.  It also reads "Super Seleccion" in partial Spanish.  Is this Spanglish?  Or, is [super] one of those awesome Spanish words like [los jeans] and [el hotel] that are the same in English/Spanish?? 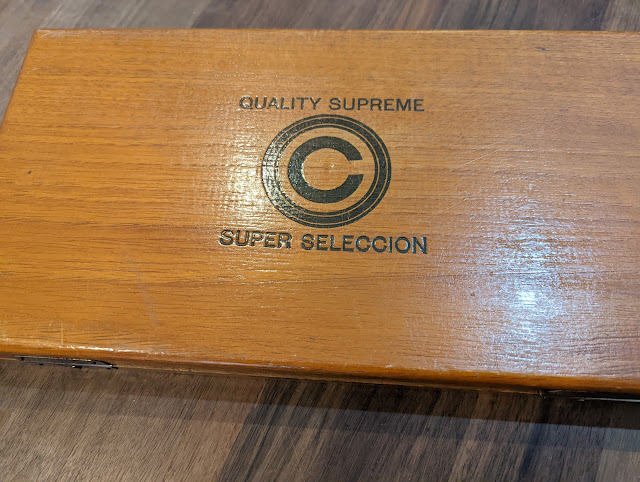 But, the star of the show is the interior shot.  Tilt the lid up and you get this full-color seal with the "Cherry Circle" on top, a drawing of the exterior of the building with the circle-C logo.  And...the copy:  "Manufactured Expressly for Chicago Athletic Association by M. Bustillo & Merriam." 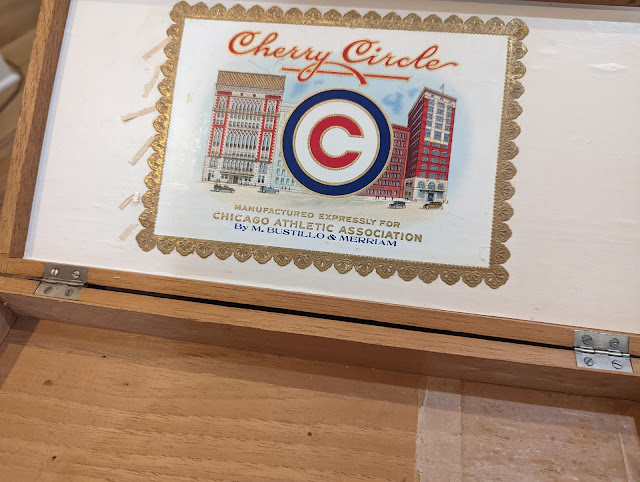