I've been a proponent of a low-moisture cheese for pizza making for a number of years.  A special cheese, specifically:  Chellino Scamorza Cheese.  It isn't smoked and is most-similar to the traditional low-moisture Mozzarella that you find at the Jewels or Marianos.  But, I've been experimenting with a different set of cheeses with my Bar Pies.   I took that class with the OG Pizza-online-guy Adam Kuban last year where he talked about his "KuBlend" where he talked about how he blends a couple of cheeses for Bar Pies.  For some recent Bar Pie experiments, I've moved away from the Chellino Scamorza and have begun to trial this 2 parts Whole Milk Mozzarella (low-moisture) and 1 part Fontina.

Fontina has been on my radar for a bit as the folks at Via Napoli in the World Showcase at EPCOT Center use it (see this post from 2017 that shows a few cheeses they use including: Robiola, Parmesan, Provolone and Fontina.)

Below are the two products that I've been using:  On the left is Bel Gioioso Fontina.  And on the right is Galbani Whole Milk Low Moisture Mozzarella Cheese - which they bill as "Italian Style". 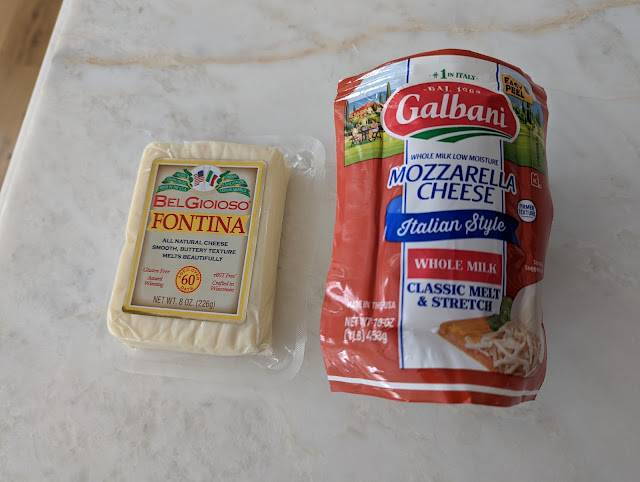 I use a box grater to shred up both and I've found that the Fontina - when shredded - clumps together.  So, I end up alternating between the two cheeses, otherwise I end up with big, clumpy layers of Fontina and it isn't spread around the pies evenly.