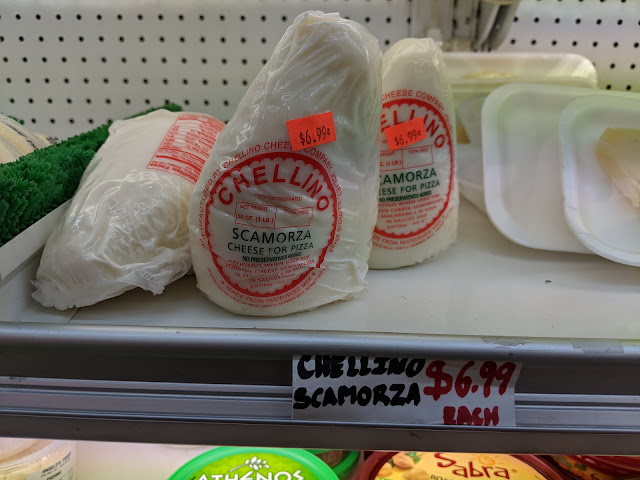 Earlier this month, I posted about Nature's Best Market in Westmont and the deal they had on Chellino Scamorza Cheese out of Joliet.  Nature's Best Market sells it for $5.99 and that's quite a bit cheaper than what I normally see the stuff at Italian markets or a place like Angelo Caputos or Pete's Fresh Market.

I can't say it enough:  go find this Chellino Scamorza cheese.  If you are in the business of making pizzas at home, it will change the way you dress your pies.  It is super salty and seems to have a very high burn point, so you can really cook your pies well done and not come away with a very dark/too dark top.

The reason why I'm posting about it again, is that I've now found a second source that is in close proximity to our #newoldfarmhouse:  Angelo's Italian Market on 55th Street in Downers Grove.    Having lived in Downers Grove for more than half-of-a-year, I've now driven by this place more than 100 times.  It is right down the street from us and in between our house and the Rec Center - where the kids play hoops.  We had some time one afternoon before a basketball game and we decided to stop in to check it out.  The place is small and the rations are limited, but they seem to have had quite a crowd near the deli/butcher counter and they seem to be doing some decent takeout business with sandwiches (sangwiches) and other Italian-deli what-have-yous.

However, it was the cooler case that I was there for:  and Chellino Cheese was what I was looking to spot.  And sure enough:  they carry it.  $1.00 more than Nature's Best Market but....the good news is that there's a second source. A second source that is close to our house.  I picked up the three balls that they had on hand and gave them a squeeze.  All three were firm.  That's how I like them.  Not soft and buttery like you often find with Chellino Scamorza.  I find it harder to shred and harder to work with/store if I'm pre-shredding the cheese earlier in the day and planning on dressing the pies later that evening.