As part of my (normal) early-season puttering around the yard and garden, I've been trying to take in all the signs of new growth and early-season life (new shoots, tips) as well as trying to have a look at all the damage that took place over the Winter.  I've posted about all the gnawing that the rabbits (jerks) have done on things like our sedges and Oakleaf Hydrangeas.  But, the cold weather has also done some damage to a few things including part of our Upright Hicks Yew hedge (in training) in the far back of our yard.  Below is a photo showing the fourth-and-fifth Hicks Yew (when facing them from the house, counting from the left).  You can see the orange parts of the larger one that has suffered some cold, Winter damage.  This is a bummer as this was one of the tallest Hicks Yews that we've had grow back there. 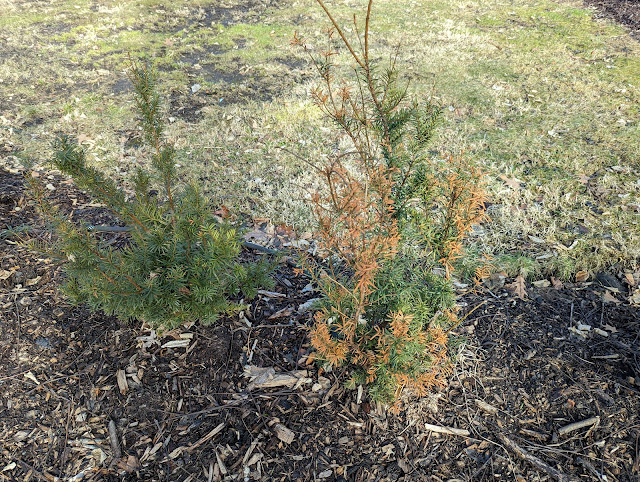 There's still plenty of green growth on this one, but I'm troubled by the orange parts.  This is the ONLY one of the 15 back there (planted in 2020) that suffered like this, so I'm unsure of the reason for the decline.  I'm NOT planning on pruning anything off of this one just yet, and hope that as the weather warms up, we'll see this Hicks Yew put on some new, top growth.  But, is that the right move?  Should I prune this stuff off as soon as the temperatures are steadily above freezing?