Earlier this week, I showed off a couple of photos that featured the pair of Sugar Tyme Crabapple trees that were in (what I then called) a pre-espalier form.  These were planted last Fall along the southside of our house, in front of our gate.   Since they had already bloomed, I thought it was time to take out the pruners and remove all the non-necessary limbs to allow the trees to focus growth on the limbs that I cared most about.

I started with a top haircut - pruning off the apical meristem or leader on both.  That usually has a strong impact on the tree where it signals a bunch of NEW growth.  I used the siding boards to get them the same height.  From there, I went two siding boards down and removed all the little, starting limbs in between those two segments.  Then, again two boards down.  And so forth.

I still am not sure what form these will take, but - for now - I'm training them horizontally.  See below for what are (now) four-level horizontal cordon espaliered crabapple trees. 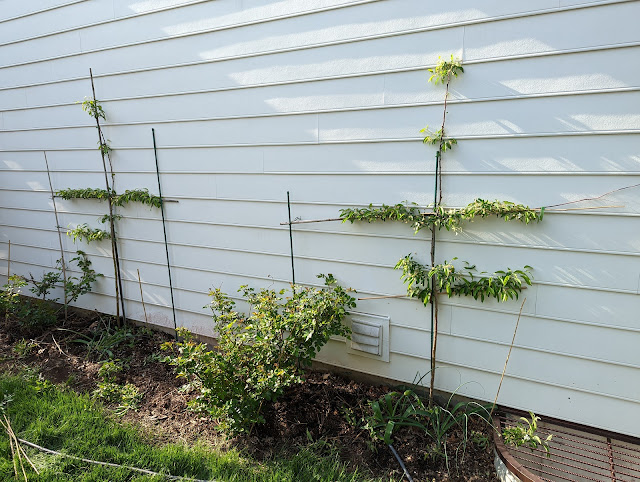 I'm pretty sure that I'm going to try to get these into a Palmette Verrier espalier form (see below).  That means I need the bottom limbs to be the LONGEST and I need the top be 'split' into horizontal form.  Interestingly...the drawing below shows just THREE levels. 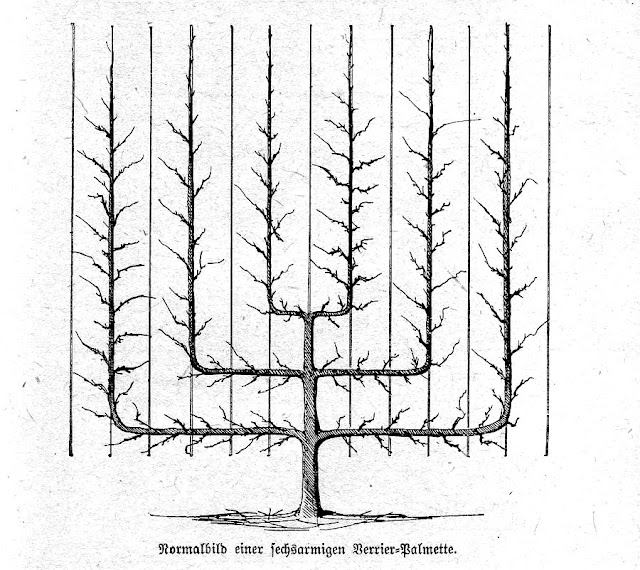 If I went with three levels, that would mean that I would NOT need this top level.  See below for an annotated version of the photo showing what a Palmette Varrier Espalier would look like. 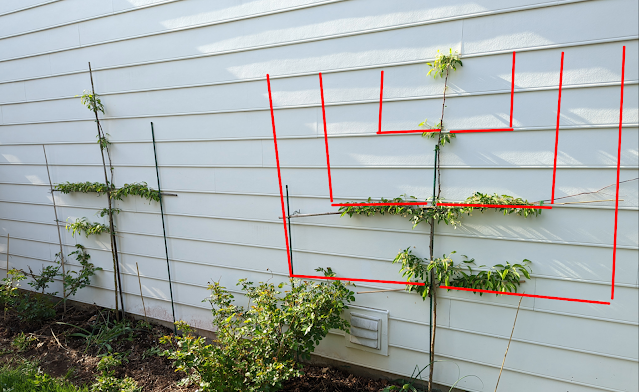 1. I'm thinking that I should *keep* that top level, despite not needing it with this form. Just a hedge.
2. I've learned that the bottom tier - which needs to be the LONGEST in this form - takes the LONGEST to grow. On my horizontal cordon espalier with Greenspire Lindens, that lowest tier is the smallest, thinnest.
3. I initially thought that I could make that shape by *bending* the tree limbs. But, what I've learned is that it is better to prune the ends to create NEW growth/new branch that can provide that horizontal upright.
4. I'll leave these alone except to remove any main trunk growth that isn't in line with these four tiers this Summer.