Crabapple Pre-Espalier Trees in Bloom - May 2022

Last Summer, we planted a pair of Sugar Tyme Crabapple trees on the side of our house - the south side that gets a lot of sun - right up against the foundation.   I watered them in a bit, but we were (mostly) past the heavy heat of the Summer (mid-September is when they went in), so I kind of let the trees just figure things out on their own.  I didn't train these very hard last Fall because of that.  I left them as is and didn't prune anything off of them.  I did, however, put a couple of limbs out horizontally with some light bamboo poles, but otherwise didn't touch them.

Earlier this Spring, there was a peek at one of them (naked) in this Disneyland Rose protection post from mid-March.

What happened this Spring?

They woke up.  And put on a really nice show.  Pink buds opened up to white flowers with pink centers clustered all over both trees.  See below for a pair of pre-espalier crabapple (Sugar Tyme - Malus 'Sutyzam') trees. 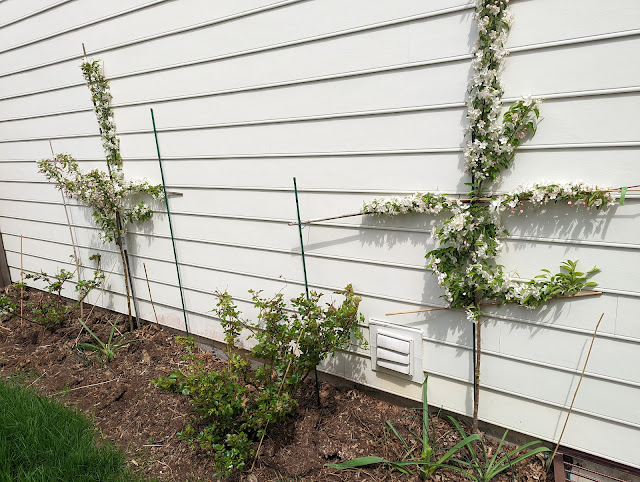 This post is going up on May 16th, but these photos were taken on Monday, May 9th.  That *was* the peak.  They're still in bloom on May 16th, but the flowers are starting to fade a bit.
The two trees are both faring well - and performing about the same.  First (below) is the crabapple tree that is closer to the backyard.  This one has a Disneyland Rose on either side of the base.  It has one of the horizontal branches being trained currently.  So, what happens next here?  I think I'm going to lop the top right off - removing the apical meristem to try to stimulate some side branching.  I figure I'll cut the top about even with the top of that green support pole on the right. 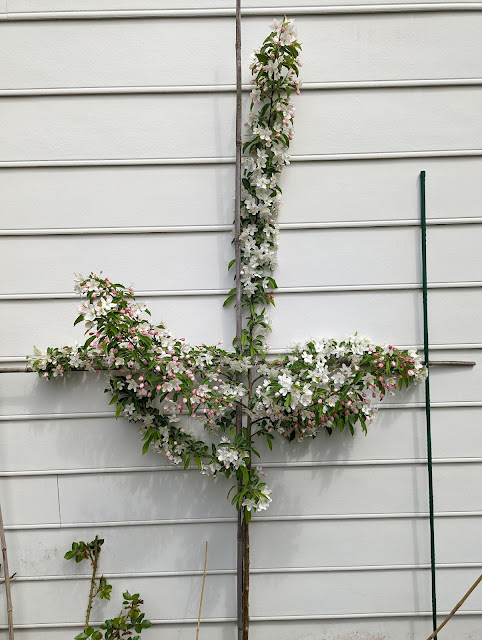 And, here below is the other tree:  this one is further towards the front yard and has a Disneyland Rose to one side and a basement window well to the other.   This one, too will get the top removed. 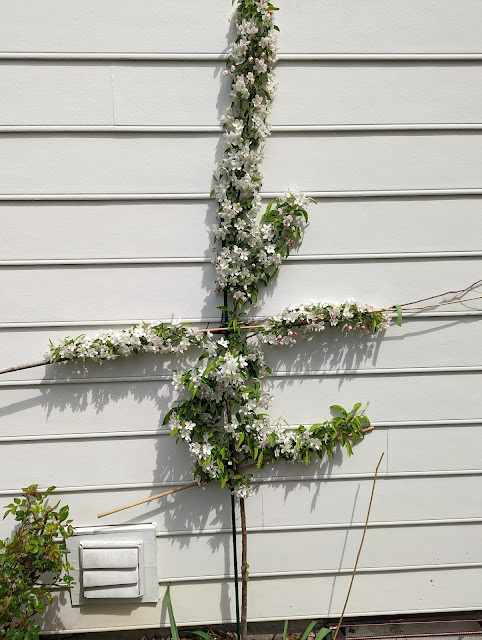 I've waited until they finish their bloom cycle - which I mentioned is in decline - before I give these too hard of a prune.  That's on my to-do list in the coming days/weeks.  What form, though?  Here (below) is a look at some espalier forms.   Palmette and Palmette Oblique are what I'm thinking, but I'm also drawn to an informal fan shape. 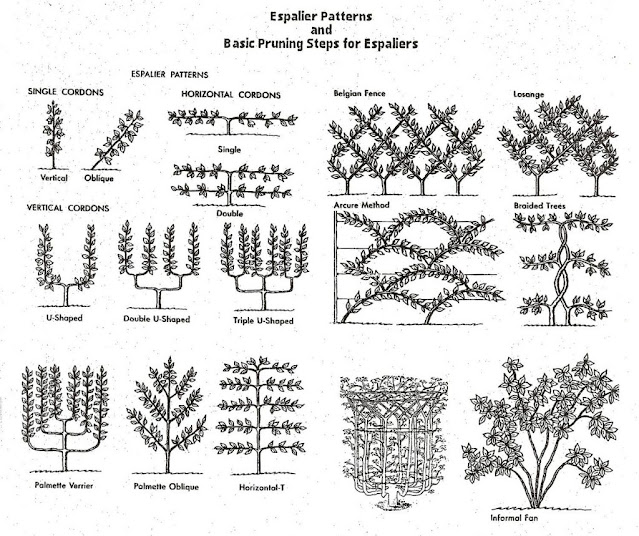 #6 on my 2022 to-do list was to work the 'fun' trees - including wiring up of these crabapples.  While I'm at it, I should remove the frame from the Lindens and think about replacing the dead trees in my Belgian Fence.  More on those when I get to the projects.