This past weekend, our next door neighbors had a party on their back patio.  It was a really nice time (aside from a sting...) with a lot of great people.  At the party, I found myself sitting in one of their Adirondack chairs and facing my own house.  And I couldn't help but be struck by this big, blank wall staring back at me: 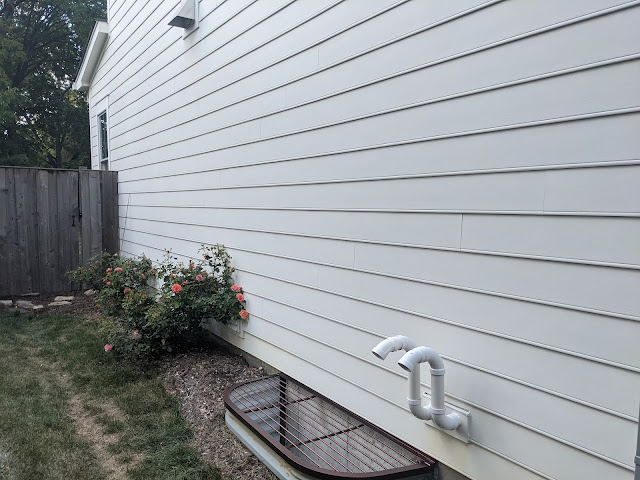 This is part of the south side of our house that has a little sideyard that we've (mostly) neglected.  I have three Disneyland Roses over there - you can see two of them in the photo above.  But, there's just a linear, foundation-hugging border and some ratty turf.  Based on how the Village of Downers Grove mandates the grading, there's also a little ditch1  but other than that, nothing much to see here.
I've long thought about converting all of this side yard into a bed; it gets a lot of sun, the grass doesn't do much for me and it would be a little bonus garden.  The downside is that nobody really sees it - including us.  But, that's (maybe) for another day.
Back in February of this year, I posted about a plan for some backyard trees.  The post was mostly about getting my thoughts straight and where I'd want to put a few new trees.  In that post, I included a pair of trees along this side of the house - as my second installation of espalier.
I've know that I wanted to espalier some flowering trees over there, so when I was out recently, I checked out the deals on some fall planting trees.  I found a pair of these Malus 'Sutyzam' (Sugar Tyme) Crabapple trees at Home Depot and wasn't sure if they'd work for us.  I went to the same source that I looked at before:  the Wisconsin Horticulture Extension Office.  Why?  Because they keep a list of recommended Crabapple trees that are more disease and blight resistant.  They call their list "proven performers".  And, when I looked up the trees in the white flowers/red fruit section, sure enough Malus 'Sutyzam' (Sugar Tyme) was there.
My second source of truth - when it comes to plants and trees - is usually the Missouri Botanical Garden.  What do they say?

Done and done.
Here's the tag for the trees below: 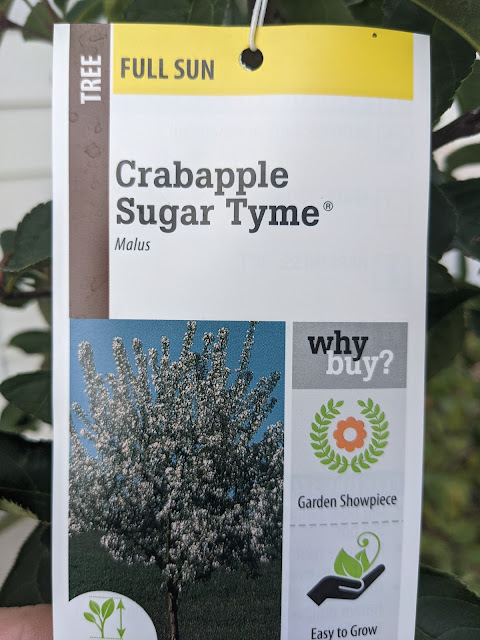 After bringing them home, I quickly sized them up for fronts, tried to figured out how I'd prune them, then stuck them in the ground.  Spaced on either side of some of the Disneyland Roses.  They'll fill up this blank wall and provide quite a bit of interest - once I train their limbs up and out. 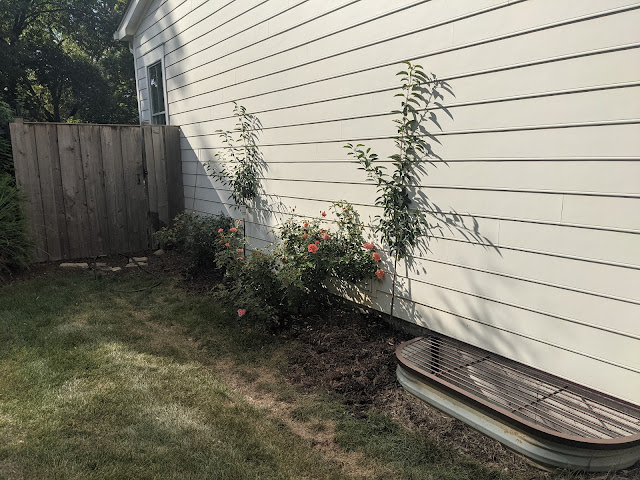 Now...I have to figure out what FORM I'm going to use for the espalier.  Horizonton Cordon (again)?  Palmetto?  Palmetto oblique? What about an informal?  I'm planning on NOT attaching these to the house, but instead going to try a more free-standing bamboo pole support system.  I'll head to the nursery this weekend to pick up some poles and get it setup.  However, I'm not sure I should be doing a lot of heavy pruning this late in the season.
I also need to add these to my tree-planting tracker that I keep here on the blog.
In terms of keeping score, these are the 60th and 61st trees planted since we bought the property and have 40 trees alive.
Across this being our fifth growing season here.

61 trees planted/5 growing seasons = 12.2 trees on average planted each season.
40 trees alive/5 growing seasons = 8 trees on average survive each season.
Nine trees this season would match our lowest total for an annual planting cycle since we started in 2017 - and be equal with 2017 and 2019.  But, I'm pretty sure that I'm going to add a a few more to the yard this year - and try my hand at pleaching;
2017 (9 planted. 4 Dead. 5 of the original annual total alive now):
1. Flowering Pear in backyard on north side.
2. Flowering Pear in front yard by garage. (LOST and replaced)
3. Japanese flowering cherry
4 and 5: 2 Lindens that I espalier'd and placed by the south fence line near our kitchen windows.
6. A Dawn Redwood from Earth Day 2017 (LOST and replaced)
7. Nat's Saucer Magnolia in our front yard
8. A Corkscrew Willow all the way in the back (LOST)
9. A Crimson King Norway Maple near the trampoline
2018 (17 planted. 6 Dead):
10. Another flowering pear from Earth Day 2018
11. Red Maple Sun Valley tree from Earth Day 2018.
12. Weeping Cedar tree - our first evergreen.  (LOST)
13. The weeping flowering cherry tree that the Babe planted for Earth Day 2018.
14, 15, 16, 17, 18, 19, 20, 21. These Frans Fontaine Hornbeams.
22. A replacement Chanticleer Pear tree (3" caliper) out front by our garage
23. Our second evergreen - a short Fraser Fir Christmas Tree out by the trampoline. (LOST)
24. This Canadian Hemlock that is the first of nine that our landscape plan calls for in the backyard. (LOST)
25. Our replanted/replacement Dawn Redwood. Same spot as the first.
26. This teeny-tiny Bald Cypress that I planted in the front yard, in between our driveway and our neighbor to the north.
2019 (9 planted.  5 Dead):
27, 28, 29.  A set of three small Canadian Hemlock Trees in our far backyard. (Two Lost)
30, 31, 32.  This second set of three small Canadian Hemlocks along the north fence line. (One Lost)
33.  My new Weeping White Spruce that will only grow about 4' wide placed near the fence line alongside the espalier'd Lindens.
34.  A NEW Dwarf Alberta Spruce planted near the south fence line.  Our first "dwarf" tree.
35.  This new Hakuro Nishiki Willow (Dappled Willow) tree planted close to the flowering cherry on the southside.  LOST - October 2020.
2020 (So Far) (17 planted and 6 Dead):
36.  A small Chanticleer flowering pear on Earth Day 2020 outside our screened porch.
37.  A very thin Lombardy Poplar tree - columnar form - in the way back wood chip area.  LOST - July 2020.
38, 39, 40, 41, 42, 43, 44, 45.  These apple trees in a Belgian Fence espalier.
46.  A small Northern Red Oak tree - our first Oak tree planted.
47.  A 'decapitated' Lavender Twist Weeping Redbud that I planted on a whim.
48.  A replacement (from the nursery) Lavender Twist Redbud planted close to the brother.
49.  A tall(ish) London Plane tree that suffered some transplant and frost shock, but seemed to recover.
50.  Our second contorted tree - this one inspired by Disneyland Paris: a Harry Lauder's Walking Stick tree.
51.  Our third contorted tree - but one that checks A LOT of boxes.  Deciduous conifer.  Weeping.  Contorted.  Japanese.  Planted behind the front Maple - the Horstmann's Recursive Weeping Contorted Larch.  LOST - Aug 2020.
52.  Via the Morton Arboretum Plant Sale - a columnar tree from Japan - the Red Fox Katsura Tree that I planted as an understory tree to the dying Chanticleer Pear Tree next to our driveway.
2021 (So Far) (9 planted and 9 alive):
53.  A tiny bareroot Shagbark Hickory from the Benet Academy Environmental Club planted in the backyard.
54.  Our first Japanese Maple - a dwarf Tamukeyama Maple planted in the south backyard bed.
55.  A large Weeping Nootka Falsecypress from Wannemaker's planted in the new bed on the northside.
56.  A long-sought-after Emperor I Japanese Maple - our second Japanese Maple - that is now planted on the border near our new-to-be-created fire pit area in the backyard.
57.  A Harvest Gold Hargozam Crabapple tree in our Belgian Fence (replacement)
58.  Another Harvest Gold Hargozam Crabpple tree in the middle of our Belgian Fence.
59.  A dwarf Japanese White Pine - Pinus Parviflora Nana (or perhaps something else)
60. and 61.  A pair of Malus 'Sutyzam' (Sugar Tyme) Crabapple trees on the southside of our house in pre-espalier form.
1. [Using the word "ditch" is a bit extreme here. It is more like a little depression - where they can ensure that you keep most of your surface rainwater on your own property.]↩