A week ago, I started posting a series of photos of the plant material that we brought home from the annual Morton Arboretum Arbor Day Plant Sale.  The first of those posts were these three Little Honey Oakleaf Hydrangeas that are bright chartreuse in color and are dwarf (under 5' tall) in stature.  The plan called for three Little Lime Hydrangeas, but because this spot is deeper into the shade than it used to be (when the plan was built/drafted), I decided to call the audible and move to an Oakleaf variety.

I tucked these three into the area just to the West of where I dug out the Lilacs.  They get four feet tall and four feet wide, so when mature, they'll (hopefully) fill in the current spacing.  You can see the three Little Honey Oakleaf Hydrangeas standing OUT in the landscape below: 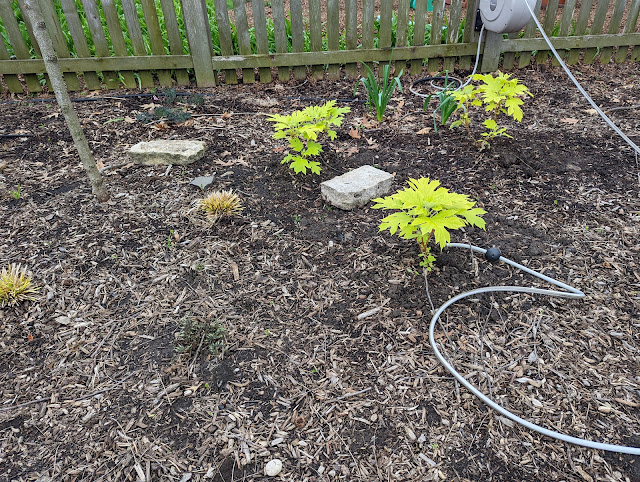 Here, below, is an annotated version of that same photo showing where these are located - understory of the flowering Kwanzan Cherry tree and bordered by the Everillo Sedges and one (of the three) Crested Surf Painted Ferns that have (thankfully) come back this season (their second). 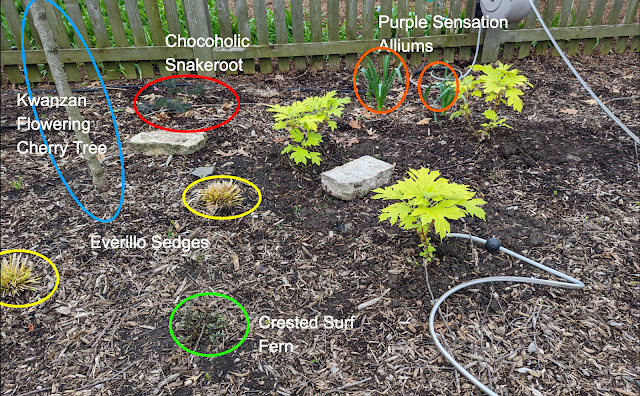 This area calls for some upright evergreens back against the fence - likely upright Yews - or if the Green Giant Thujas work out, perhaps an extension of those to this border.