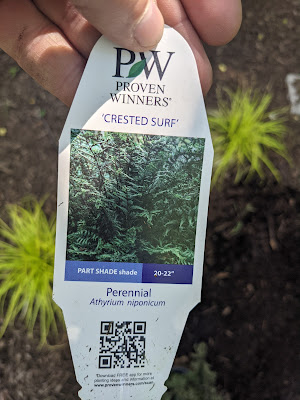 I'm on a little bit of a roll with Japanese Painted Ferns and other related cultivars in the garden this growing season.  I've had one in our side yard for a couple of years - next to the screened porch.  Planted in 2018, it has established itself and is now being crowded out by some Bressingham Blue Hostas that I'm going to try to divide this Fall.

Earlier this year, I planted four Ghost Ferns in the bed along the northside of the backyard - right at the base of the Weeping Nookta Falsecypress tree that I (also) planted this Spring.  The Ghost Fern is a Lady and Japanese Painted Fern hybrid - with the color of a Painted Fern and the habit of the Lady Fern.

And, just last week, I posted a photo of my second traditional Painted Fern - a Pictum - planted in the border around our new fire pit area in the far back.  It is at the base of our new Emperor I Japanese Maple tree (you can see the fern in the photo in this Maple Tree planting post) and are the first couple of elements of a Japanese-inspired woodland garden border back there.

That raised my total up to six Japanese Painted Ferns - 2 Pictums. 4 Ghosts.

I had this Priority Area #1 on my list for 2021 that called for a big stand of ferns. Ostrich Ferns.  But, in my mind, I was thinking that I was going to mix up Ostrich Ferns with other varieties - including some Japanese Painted Ferns.  However...the fire pit area construction caused me to rethink this being a 'planting priority' for this year.

I posted this little overlay on the backyard that showed the location and plan for the fire pit area and included some inspiration of a little path back there - leading to the fire pit.  As I've talked about a number of times over the years here on the blog, I've always wanted a little backyard path.   If you look at that post, you can see the little path plan - and I've included a (slightly updated) version of the drawing below.  The orange oval is the location of "Priority Area #1" for 2021 - where the ferns were slated to be planted.  Seeing it now - and the idea of where the path will *eventually* go, helps explain why I decided to punt on planting ferns in the area for the season.  I need to lay out the path first, then plant around it.  Otherwise, I'm just going to have to transplant everything that goes in now, once the path gets laid out. 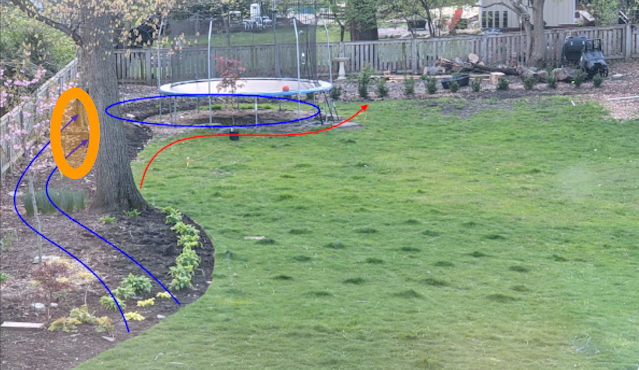 But, the lack of planting of ferns in this area, hasn't stopped me from shopping for ferns.  Like all of you, I hit up the big box and local garden centers and shop from time-to-time.  Buying some things that are in plan and just observing other items.  On one trip to our local Home Depot, I came across something called. Crested Surf Fern.  It looked like a Japanese Painted Fern, but has some slight deviation in the fronds.  There were a few of them at the Darien Home Depot that I had in my hands, but decided to put them back.  I figured I could live without them.  They were in slightly larger containers than most of the nursery stock at Home Depot.  They weren't in 1# pots, but what I think were 2# containers.

I came home and couldn't stop thinking about them.  But, I still didn't buy.  Until one day, I went back in seeking them out specifically, and guess what?  They were gone.  No big deal, right?  I went on with my days/weeks.  Until one afternoon, I was driving up to Wisconsin and stopped at a Home Depot on Route 12.  And guess what I found?  Three (the number I had in my head of how many I wanted to start with) Crested Surf Ferns in 2# containers.  And they were marked down.  These were MEANT for our garden, it seemed.

I brought them home and found a spot on the south side that I thought these would work.  They're taller than most ferns - and can be perfectly at home in the middle of a border. 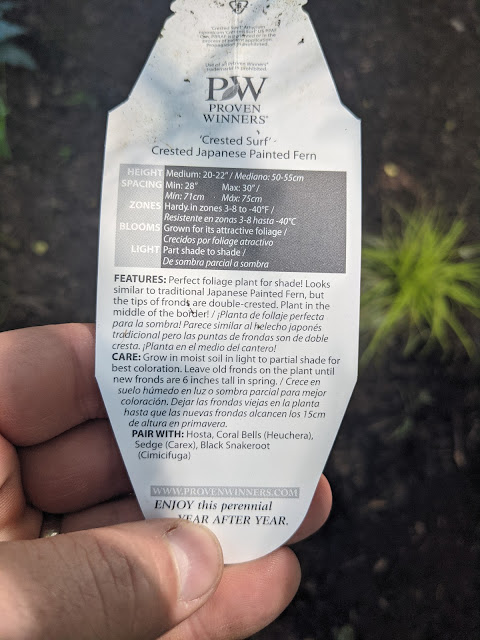 The back of the tag describes this perennial fern: Perfect foliage plant for shade! Looks similar to traditional Japanese Painted Fern, but the tips of the fronds are double-crested.  Plant in the middle of the border.

Behind the border of a mix of transplanted hostas, I had some room, so I dug up three holes and spaced these about 30" apart.  Below, you can see the spots where I moved the mulch away in preparation for the holes: 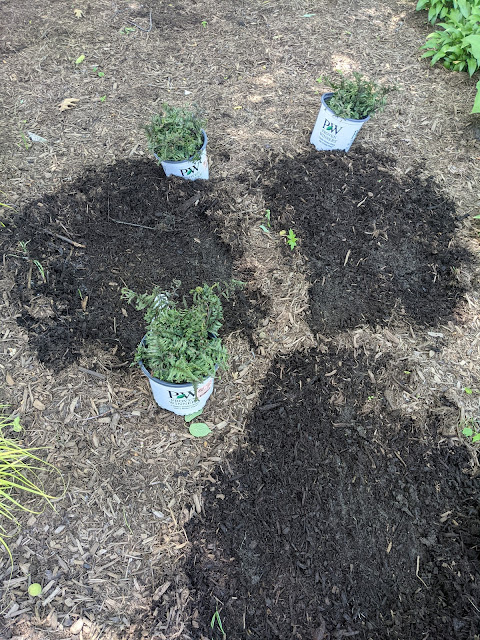 And, below, are the three of them in the ground.  In pretty deep shade - and adjacent to the Everillo Evercolor Sedges that I planted underneath our Kwanzan Kanzan Flowering Cherry Blossom Tree. 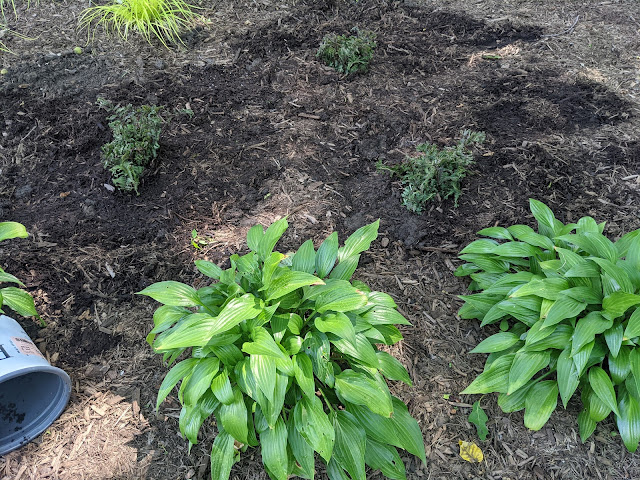 I watered them in quite a bit and they seem to have quickly established themselves.  In a test, I also fed just ONE of them - see below for the placement of the gallon jug of 20-20-20 liquid fertilizer - to see if they'd react to being fed.  It is the one placed furthest back in the bed - closest to the sedges that was fed with about half-a-gallon in late June. 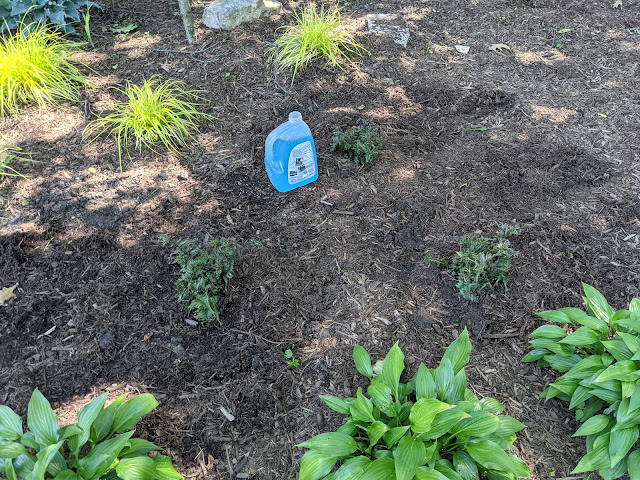 As for those double-crested tips, here's a look at them below.  Pretty neat, right? 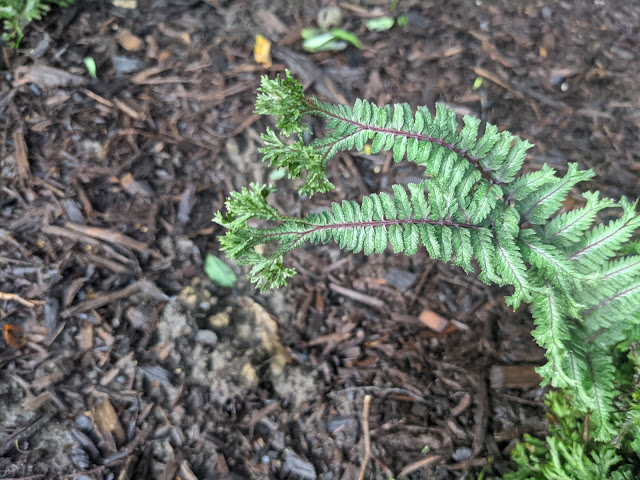