I planted a trio of Cat's Pajamas Nepeta (along with some Blue Fescue) out front in the bed IB2DWs this Spring and it was the FIRST Nepeta that I've planted.  One of the features of Nepeta is that it can take a haircut after the first bloom - to both push a second flush of flowers but also to keep the plant neat and tidy.

In the online gardening world, you'll hear people talk about the 'Chelsea Chop' - where you prune things back in late May to get that second flush.  More here on the Chelsea Chop.

I went ahead and pruned back these three Nepeta.  You can see that in the photo below showing the three pruned and cleaned up along with the pile of plant material that I pruned out laying in the middle of the photo - to show how much I took off these perennials. 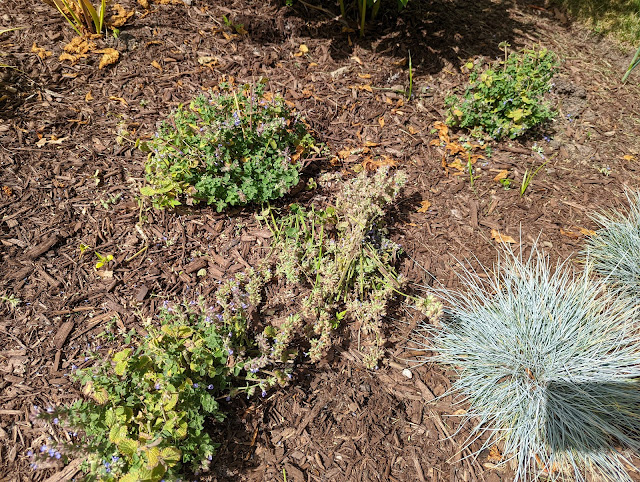 From a purely technical perspective, you might be wondering:  Is this a "Chelsea Chop"?  The answer?  Maybe?  But, probably...Not really.  I think the goal of that move is to delay blooming.  My goal here is to drive a secondary bloom.  Also, I chopped these off in the middle of June - a few weeks late.  I'll keep an eye on these to see how they react to this pruning and report back here.