Are These Catalpa Tree Seedlings? August 2022

Last week, I posted some photos of the process of late-season Catalpa tree seed sowing in a few seed cells that we had on hand and talked about how I hoped they'd germinate and we would (maybe) get a few seedlings to harden off before the frost hits in the next six to eight weeks.  I started the Catalpa tree seed project back last last year when I harvested a few Catalpa seed pods and tried to get them going two ways:  first by putting them in the fridge for the Winter to get that cold stratification.  And, by also popping open some brown seed pods and direct sowing some of them in a couple of spots.  I covered that Catalpa tree seed sowing here in a post on Christmas Day.

Back late last year, I planted these seeds in two spots:  along the fence.  And in a large wine barrel planter.  Both, frankly...on a total whim.

The ones along the fence have never amounted to anything. Between laying on a thick layer of mulch and seasonal weeding, these things didn't have a chance.  But, the ones in the wine barrel planter?  I totally forgot about them.  Until last week.  When I went back and revisited this post and remembered that I tucked a few native tree seeds in there.  I had put that picked vintage garden windmill on top of the planter and didn't think much about the seedlings.  My plan was to grow annual vines, but that didn't work out this year.

But, when I removed the windmill, what did I find?  A series of 12" or so tall seedlings.  And, seedlings with large, heart-shaped leaves.  See below for a couple of photos of these 'found' seedlings. 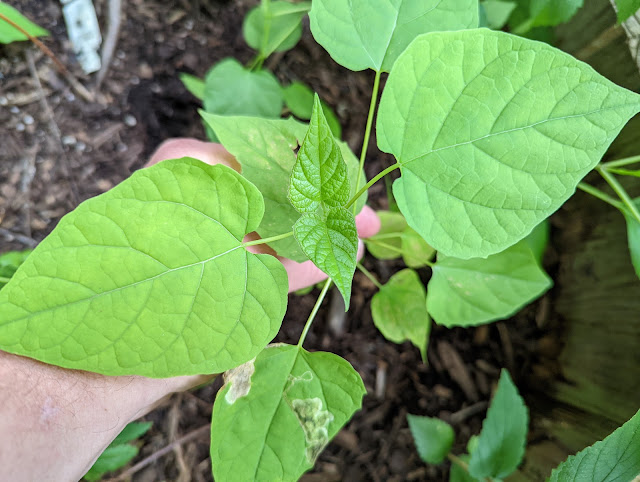 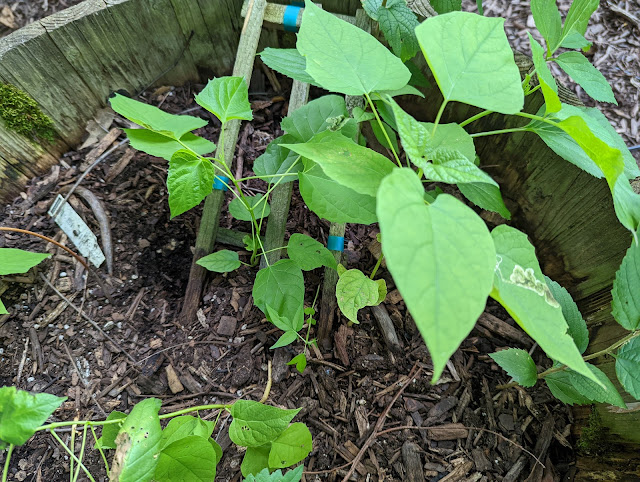 And, here, below are a couple of photos that show the location of these a little clearer in the wine barrel planter.  There are three seedlings that I've left after clearing out a a few other things like American Elm tree seedlings and other weeds. 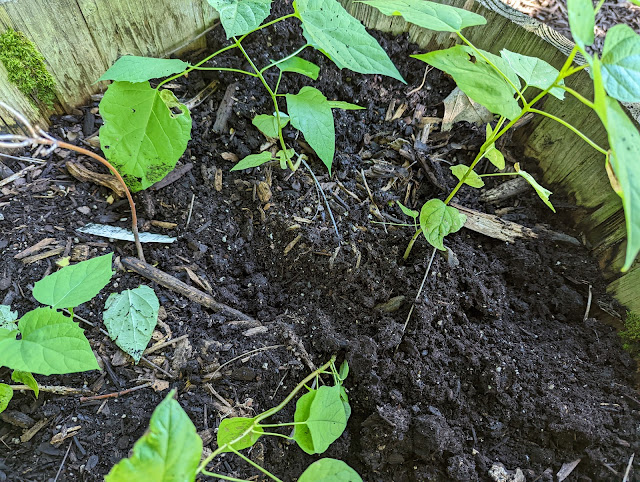 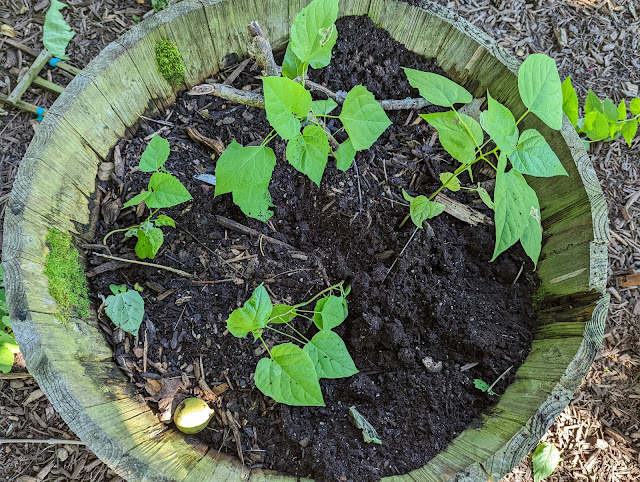 When I look back at the photos showing where I planted the little, white winged Catalpa tree seeds, it is plausible that these could be THOSE seedlings.  And, why wouldn't they be, right?  They're large-leafed seedlings that have heart-shaped leaves.
But, are they Catalpa trees?  I'm not sure.  If you spin around the Web, you'll find some info about how to positively identify Catalpa seedlings (and trees for that matter).  The leaves of my seedlings sure look like young Catalpa trees.  But, there's another characteristic that defines Catalpa trees:  their leaves (VERY OFTEN) occur in whorls of three.  That means that there are three branches/leaves that come from one node.  NOT two.    This post talks about how many people mis-identify Catalpas and often view Paulowina trees as (hopefully) Catalpa seedlings.  They have similar leaves, but Catalpas have leaves in whorls of three, but Paulowina trees have opposite leaves in pairs always.
What do these seedlings have?  Whorls of three?  Nope.  They're in pairs.
Does that mean these aren't Catalpa trees?  Not necessarily.  Turns out, young Catalpa trees *can* have opposite leaves - in pairs.  From that same post, this comment calls out Northern Catalapas and how some trees have both whorls of three and opposite pairs of leaves:

Catalpa speciosa – Northern Catalpa – can have whorled or opposite leaves. In fact, they can have both arrangements on the same tree and even the same limb. In winter, the whorled arrangement of their three leaf scars is considered an important aid to the identification of the tree. The USDA Plant guide for Catalpa speciosa states “Leaves are generally opposite on large branches and often whorled in 3 on young stems.

Based on that, I'm going to lean towards these actually being Catalpa seedlings.  As such, my plan is to try to dig them out and plant them up in little nursery containers.  Maybe those little ones from the Kentucky Coffee Tree seedlings would work?
I'll plan on overwintering these in containers - not in the wine barrel as that very likely gets TOO cold - as it is up in the elements.
With some good luck - and positive transplanting, I'm hoping that I'll have two species in my native tree nursery next Spring.  And, if I figure out how to deal with Black Walnuts, maybe three.
2022 to-do list Catalpa Trees from seed garden diary native trees seasonal projects seedlings tree diary tree identification tree nursery tree seeds wine barrel planters
Location: Downers Grove, IL, USA