The time has come to bring the houseplants in from outside.  We haven't gotten a frost yet, but I know that the first frost isn't too far away.  I don't move too many plants outside, but there are a few including staghorn ferns, my firesticks cactus, Nat's big fern and my standing Mickey Mouse topiary.

This year, I kept the Creeping Fig Vine topiary on the front porch all Summer.  That meant that it received a tiny bit of morning sun, but was in the shade for the bulk of the day.  It was just six weeks ago that I last posted an update on my Mickey Mouse that showed off a good seasonal growth spurt.  If you go back and look at the photo in this post from early August, you'll note that his hands were (at that time) not covered and that there were a few 'shoots' poking out.

Today?  See the photo below for what Mickey looks like after a full season of outdoor growth: 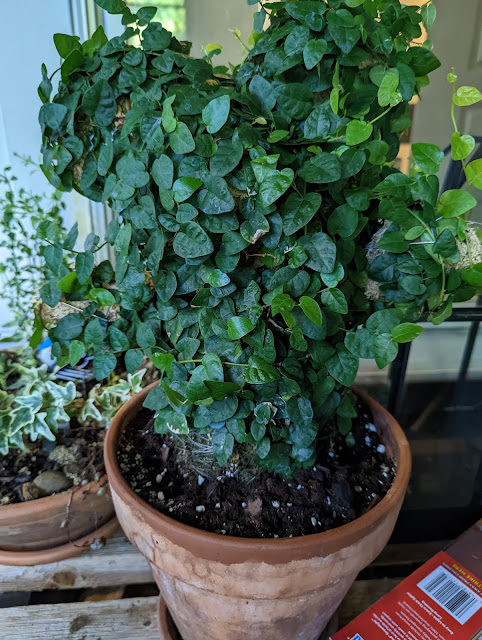 This is 18 months of growth and it is pretty well close to being totally full with the frame and moss covered.

I've tucked this in on the bench in the screened porch where it will live until the hard part of Winter arrives.  I've found that most of our plants do better out there - they don't freeze - but they also don't dry out like they do inside the house.