'Tis the season for documenting our house plant collection in the [container diary], it seems.  I've done Nat's large Fiddlehead Fig tree, my wire vine plant that we brought in from outside, my only (for now) Staghorn Fern and my Maidenhair Fern that I recently repotted.  However, I have a potted plant (a cactus) that I've had longer than any of those - in fact, it might be the oldest house plant/container that we have on hand:  a Firesticks Cactus Succulent.  Seems that I've long called this a "pencil cactus", but that's not accurate.  This is a succulent and officially named:  Euphorbia tirucalli 'Sticks on Fire'.

I posted some photos of this succulent when it arrived in March of 2018 - almost four years ago.  I had it in an orange container that I've moved on from - I think it cracked - because the current container isn't much larger than the original one (hence...I don't think I sized-this-up).

What does it look like four years later?  It is pretty big:  see below for the current state of my Euphorbia: 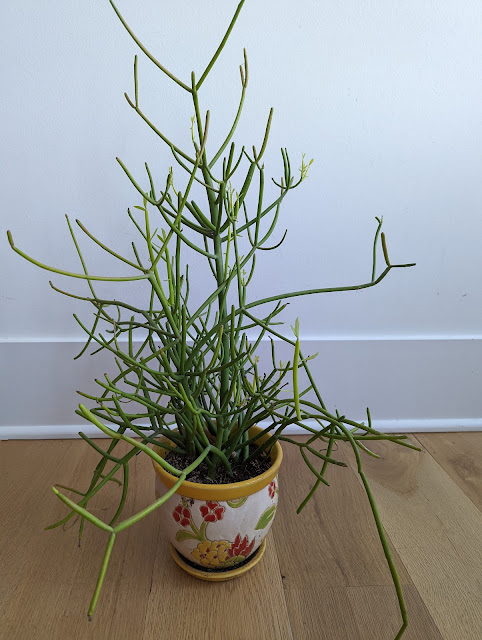 This succulent spends the summer outside in the shade and has been brought inside for the past few Winters.  As for maintenance, it is a pretty carefree succulent and responds well to just a little bit of water and attention.  If you look closely at the tips, you'll even see some new, Winter growth.

I have fed this previously, but like all my other houseplants, I stopped feeding them once they come inside to get them ready for Winter.  That hasn't seemed to slow this one down.

Now...as for the pot:  it is a 6" diameter pot.  5" tall with an integrated saucer.  My hunch is that this succulent - while clearly happy - is very likely root-bound.  It should get an upgrade.  But, not a big one:  I'm thinking an 8-inch-or-so pot that is about 8" or so deep will give it a little cushion.  Balancing the size of the new container with weight (should I think about plastic container?  They never look as good...) to allow it to move in/out of the house during the different seasons.   I'll put this on my (potential) 2022 to-do task list.