I've gone about splitting, stacking and seasoning firewood in different bursts (of activity) over the past few years.  Usually, I process, split, stack the wood during the winter months in preparation for Fall/next Winter burning.  Here's a look at some January 2021 winter-time splitting.  I've done this with a splitting axe.  But, the Norway Maple rounds that I recently put on the new rack in the backyard are different than what I've dealt with previously.  Some of these rounds are *so* big and *so* heavy that I can't really move them, let alone put them up on a block to begin splitting.  So, the axe has worked, but it has mostly - what I call - 'nibbled' around the edge.  You can see those results here from the end of October where there are a lot of thin slices.

My Dad recommended that I try a splitting wedge on the very big, borderline immovable rounds.  The theory is that the wedge can split them in-place and by removing 1/2 to 3/4 of the wood in sections, they suddenly become much lighter and I'm able to handle.  I start by working to get a little grove in the top of the rounds with the splitting axe - just enough to stick the wedge in so it can stand up.  Then, whack, whack, whack.  With the sledge hammer.  See below for the wedge, hammer and my splitting block: 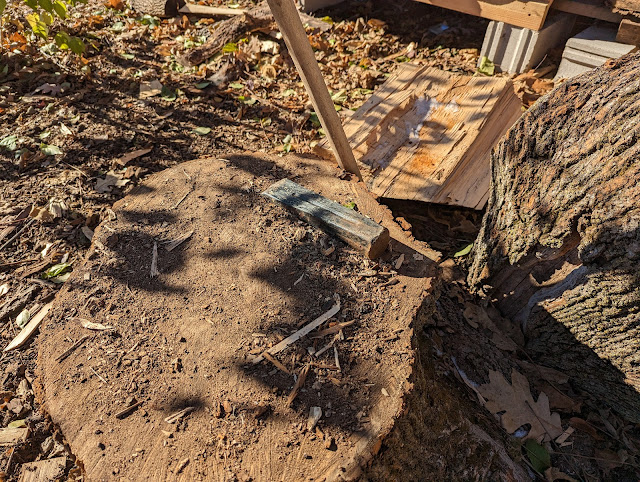 Below is a look at one of the massive rounds - this one is maybe 28" long, which is too long.  But, there are knots and what-have-you on this thing, so that was the shortest it could be with a chainsaw.  It was virtually impossible to move as it weighed SO much.  So, I stood it up on end, whacked with the wedge and after hitting/straightening it a few times, the round split in two.  Pretty nice. 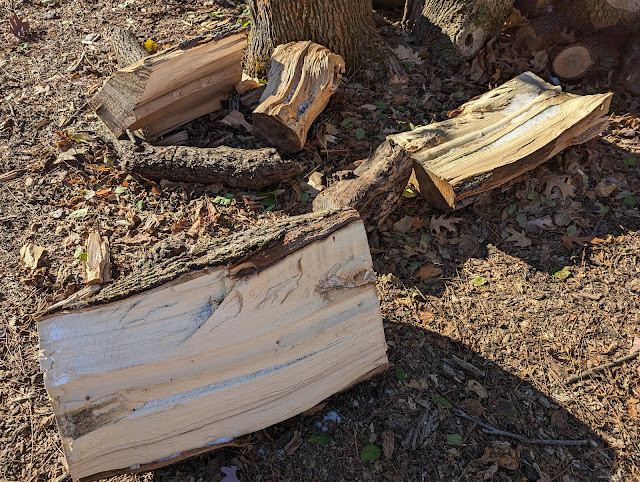 I'm thinking that I'll still be using the axe to split pieces, but the wedge changes everything.  I can go from waiting (and hoping) that the big rounds will dry out enough to move them to (now) being able to split them in (at least) two.  Which then...will both speed up the drying out AND allow me to handle them a bit more.

This Norway Maple wood was VERY wet - 50% as of just 10 days ago - so we'll see where it gets by the middle of January.