Back in October of last year, I posted some photos of a pile of Ash (or what I thought was Ash) firewood that I grabbed off of one of my neighbors who was taking down some trees.   After letting it sit around in the back of the yard for a few weeks, by the end of November, I had a couple of 2x4's from our basement project that I hauled back there to use as a sort of rack and stacked the rounds up on them to get them off the ground.  A lot of this stuff was wet and needed time to just dry out up off the ground.  Well...a month later, I found myself needing to get outside for 30 minutes or so and I decided to start to process some of this stuff.

Some of the rounds are cut to length.  But, a lot of them are not.  I don't have a chainsaw, so I decided to take a shot at the ones that were both small enough and cut to the right length.  I split them open and what I found inside looked a lot like I was expecting based on the previous pictures.  REALLY dark heartwood.  And lighter sapwood.  I split a few pieces and then stacked them up ON TOP of my rear firewood rack.  You can see them below. 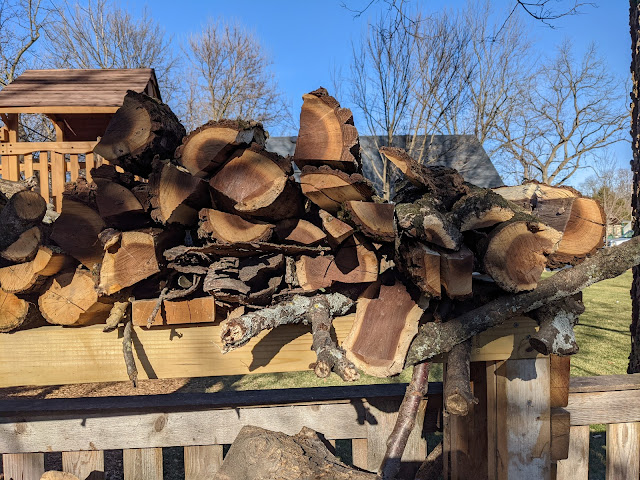 Now, I was told by the tree guy that he was giving me Ash firewood.  But, is Ash normally this two-toned?  I've had odd-colored firewood before, but that was Mulberry (or Osage Orange) that started bright yellow and seasoned to a dark almost purple.  Could this be Walnut?