That appears to be a wrap on composting this growing season.  I have all three spots filled - the tumbler (with partially-processed mixed compost from the bottom of the mixed bin), the mixed bin on the right below (with a blended batch of greens/browns and *some* passive aeration pipes installed) and a (mostly) carbon storage bin on the left.   You can see the two bins in the photo below and how they're filled right up to the top of the railing with the belief that we'll see a little settling and compaction this Winter: 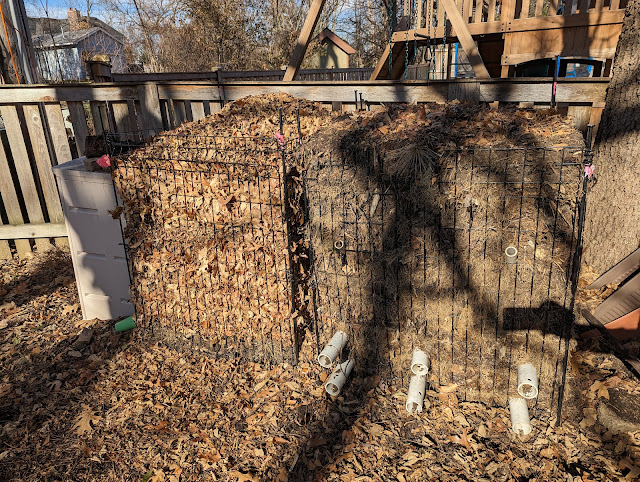 The last time I checked in on these bins was in early November when I had rounded up a bunch of leaves and filled both of these bins in a 'heaping' fashion.  In the month since, I've seen a bunch of settling in the left bin and was able to re-fill it up.  And some compaction from the bin on the right with the large mound in the middle compressing down.

I used my mower to collect the leaves in the carbon storage bin this year and as such, I also collected *some* grass clippings that are mixed in there.  I recently tossed a few pumpkins on top, too.

Last season, I top'd off both of the bins similarly and by March, the bin on the left had compressed by about 25% (see here for what the bin looked like come Spring).