Posted by Jake Parrillo on December 04, 2022
I'm not *exactly* sure how I recently came across this new (to me) pizza style, but it sure has my attention.  What style is that?  I suppose the widest birth name-wise I can give it is: Sfincione.  It is a version (most often) of something similar to a Sicilian or Grandma pizza.  Tweaked.  Kenji @ Serious Eats has done his thing with it and calls it "New Years Pizza".  It is characterized by a light, hole-filled dough that is crisp/fried on the bottom.  Sauce on top.  And...finished with the crunch of breadcrumbs.
That recipe is, however, NOT where I started on this pizza journey rabbit hole.  Nope.  It was earlier this year when I read that a pizza pop-up from Nashville (of all places) was coming to town to participate in a Chicago pizza festival.  That place is St. Vito Focacceria.
Well...that's interesting, I thought.
I didn't attend said fest. But, I've been sitting on this Instagram post from subbu arumugam about St. Vito for months as I thought about what it means - for me.
Over the years, I've made Detroit-style and have had an on-again-off-again relationship with the stuff.  I have made it for Christmas Eve a few times over the years and as recently as the last few weeks, I've been experimenting with par-baking a Detroit dough as a way to cut down the bake-time on the Eve.  But, then I remembered this post.  And I started to poke around a bit to see what's doin'.
If you pop over the Google machine, you'll see some of these photos.  See below for a screenshot.  (note...this is NOT my photo.). Roni Cups.  And breadcrumbs?!?  That's like the Prince Street tweaked, right?
First...if nothing else....seasoned breadcrumbs as a topper?  On top of Roni cups.  Even on my standard Detroit-style chassis?  Seems like a no-brainer, right?  A little bit of extra crunch.  Done and done.  I'm going to try that.
But, what else can we look at from the photos/posts.  And other stories about St. Vito?  And, their own Instagram handle, too?
Well, we learn that it is a very high hydration dough (100%) and is a fork of something called Pan de Cristal - a Spanish Ciabatta.   That means...it is A BREAD.  This King Arthur recipe is where I'm starting.
Another thing we can glean is that St. Vito's 'studs' their focaccia.  With Fontina.  I've never 'studded' a dough.  But, why not try, right?  I didn't have Fontina on hand.  But what did I have?  Romano.  5 ounces of the stuff.  I cubed it and dropped it in the dough.  A few swirls with the dough hook and the cheese cubes were incorporated.  See below for the Romano wedge I used: 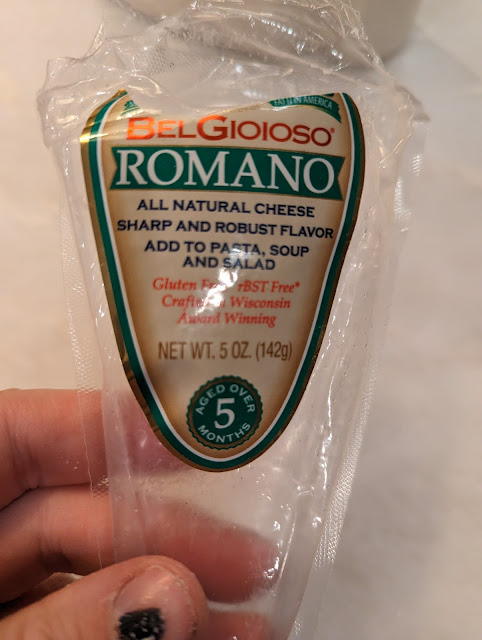 I'm now deviating from the book to fork my own path.  I decided to use my existing Detroit-style 10x14 pans and after I gave a little olive oil in the bottom, I poured (this was pretty wet...almost batter-like) into the lubed pan.  I gave it a couple of bowl folds in the pan.  Popped the lid on and tucked it in the fridge.  30 minutes later, I did the same bowl fold.  Repeated 3 more times.
I'll leave this dough in the fridge 48 hours, then will bring it out and bake it.  Pending the results, my plan is to go down a few routes:
1.  continuing to tweak this one.  But, I'm also wondering if
2.  I can try to 'stud' my traditional (and existing) Detroit-Style dough recipe?  And...finally...
3.  Breadcrumbs on every pizza from now on?
bread christmas pizza Ciabatta detroit-style focaccia grandma pizza hydration pan pizza pizza pizza dough pizza dreaming pizza making pizza planning Romano sfincione