Posted by Jake Parrillo on December 20, 2022
I might have jumped the gun.  With what, you ask?  The moisture reading on the recently split Norway Maple firewood.  As a reminder, we had a very large Norway Maple (that was in a bad state of decline) removed from our front yard this Fall.  I had the wood processed into rounds and brought to the back of our property to begin to dry out.  By the end of October, I started to split the rounds.  And they were HEAVY and wet.  (or....as they say in the firewood business:  'green').
I wanted to track how fast this Norway Maple firewood would dry out and become 'seasoned' enough to be able to burn.  The pros say that you need to get the moisture level down below 20% to be dry-enough to burn properly.  From the time that I began to split the wood to 18 days later (2.5 weeks), I was reading the moisture level to be 50%.
Now...if you read any of the firewood online forums, you'll see that A LOT of people claim that Norway Maple (or...some folks call it Box Elder wood) dries VERY fast.  Some say it takes just a couple of months from green to under 20%.  That's fast.
But, even knowing *that*, I was surprised when I grabbed a piece of this same firewood that was reading 50% on November 16th was NOW reading 13% just 18 days (another 2.5 weeks) later.  That meant, if the reading was accurate, that it took just five weeks (5 weeks) to go from 'green' to 13% moisture.  Seemed crazy.   But, when I 'clunked' two pieces together, it was giving the right sound (Those of you who deal with seasoned firewood know what sound I'm talking about).
Maybe this stuff was going to be able to be burned THIS winter.  That's why, last week, I brought a full bundle of the stuff up from the far backyard to one of the racks on the side of the house.  This rack - the smaller of the two - had been emptied from the kiln-dried stuff already.  So, filling it with the Norway Maple made sense if the stuff was going to dry out in just five weeks.
I had been using the same piece to measure over-time.  From 50 to 13.  I grabbed that same piece this weekend and imagine my surprise when I saw a different number.  A higher number (than 13%). 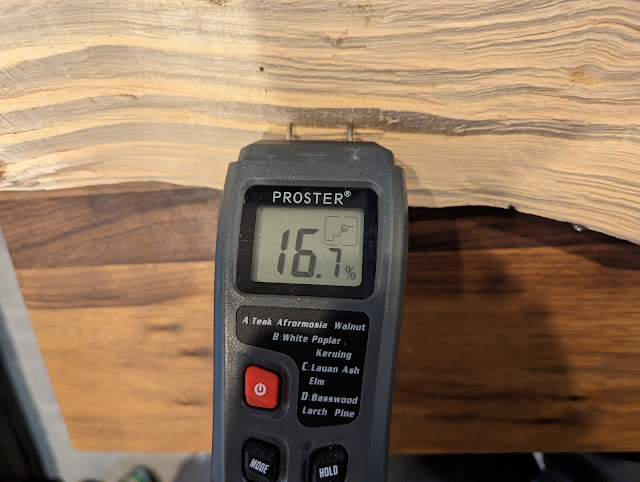 I stuck the meter in.  And it is reading 16.7%.  Huh.  Up 3%.  Still well below the 20% goal.  But, it was showing an 'increase' in moisture.
Now...I wondered WHY the difference?  Turns out, I was using the wrong settings all along.
The 50% reading is from when the meter was on setting "A". The 13% reading was from setting "B".  Neither of those are right.  According to this product listing, Maple wood is to be measured using the "C" setting.  That's the one I'm using in the photo above showing 16.7%.

So, what's it all mean?  I'm pretty sure that the wood did NOT get wetter in the past couple of weeks.  Rather, I think this new 16.7% reading is accurate.
What does that tell us?
From Oct 30th to Decemeber 20th - 51 days in total, or 7.25 weeks - the Norway Maple firewood went from standing to 16.7%.  I'll watch it and measure again in early January to see if it changes even more.  Then...maybe I'll starting bringing some of it in to begin mixing it in with our burns.
drying out firewood firewood consumption firewood diary moisture in firewood moisture meter norway maple seasoning
Location: Downers Grove, IL, USA