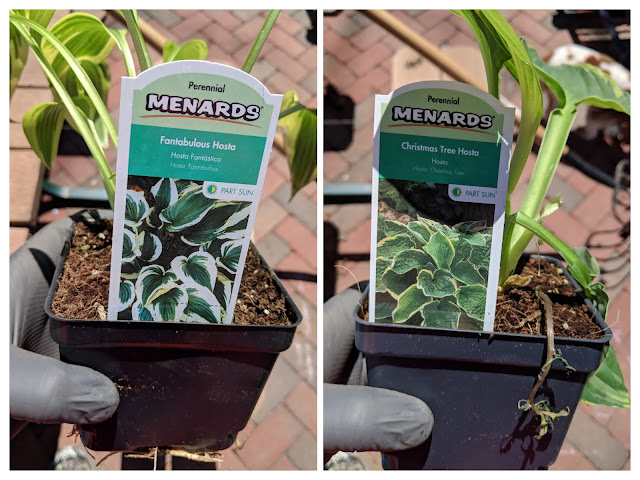 I posted about some of the various hostas that we've added to our #newoldbackyard recently including the unknown varieties of what I'm calling 'teardown' hostas that came out of a yard down the street of a home that was getting torn down and the Bressingham Blues that we bought at Costco in a bulk bag.  Above are two more varieties that I scored at Menards recently and planted in the yard:  Fantabulous and Christmas Tree.

Turning to our landscape plan, there are a few spots that hostas are called for, but most of them are in 'to be dug' beds.  Check out the landscape plan section below.  There are Hadspen Hostas spec'd for below the European Hornbeam trees on the right side along with three Guacamole Hostas right at the edge of the new trees.

Closer to the middle of the drawing is a large black circle that is an existing Oak Tree that we have our tree swing hanging from it.  Around that tree is an existing ring of mulch, but the larger bed - which the plan calls for featuring a bunch of Ostrich ferns and other larger plants doesn't exist.  It is mostly grass right now. 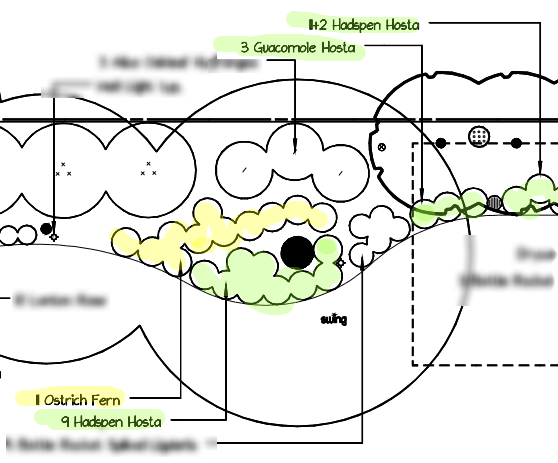 So, while the plan calls for Hadspen Hostas around the tree, I figured that these two new varieties were good replacements.  I planted the Fantabulous on the right and the Christmas Tree on the left.  I planted these right before the mulch went in, so they had a nice head start in the dirt before being surrounded by mulch, which I hope will keep them happy and well watered.  As you can see, these aren't totally in the shade right now, but as the trees in our yard leaf-out, I expect this area to get just a little bit of late morning/mid-day Sun and then fall into a nice shady spot to grow big and happy around this mighty Oak. 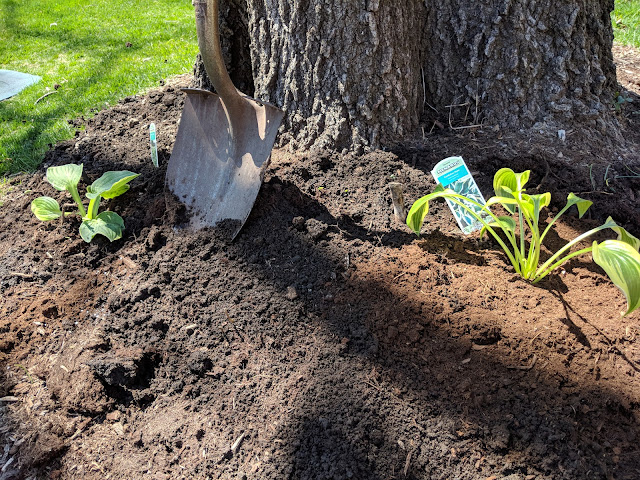 In terms of showing all the components of the landscape plan, this is the sixth slice of the backyard that I've posted about.  Those six parts of the plan (so far) are:

1. Part of the southern fence line that includes some hydrangeas, hostas, ferns, allium and Canadian Hemlocks.
2. Part of our rear foundation planting areas, right outside our breakfast nook/kitchen windows. Grasses, boxwoods and even a peek at one of the rhododendrons that *this* post is all about.
3. The hornbeam/privacy hedge on the north fenceline near our screened porch.
4. Far southwest corner by the trampoline that includes some Canadian Hemlocks.
5. A pair of Rhododendrons that stand on either side of our rear stoop.
#newoldbackyard #OnGrandGardens backyard beds garden diary gardening Hostas landscape landscape beds landscape plan shade gardens trees