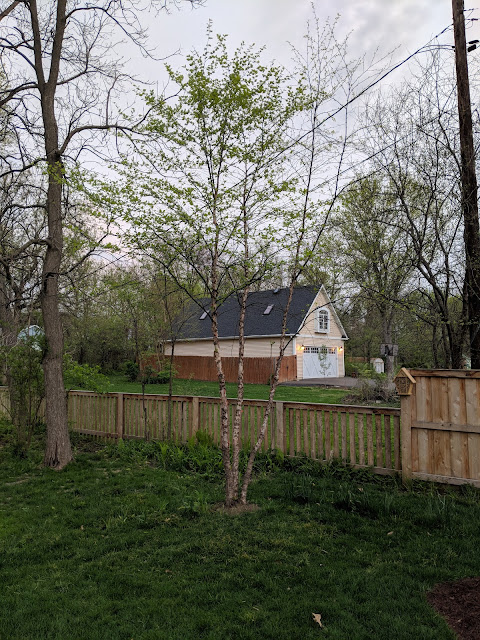 I've documented quite a bit of the new trees that we've planted over the past year of living in Downers, but I haven't really documented in my [garden diary] any of the existing trees that we inherited with the property.  I'd consider the lot we're living on to be 'wooded', so it would be a mistake - in terms of garden diary-ing -  to document only the eleven little, young ones I've planted in the past twelve months.

One of the trees we inherited is this three trunk River Birch - which according to the Missouri Botanical Garden Plant Finder is "generally considered to be the superior growth habit for this species."  This tree is located on the north side of our lot, about ten feet from the fence, right where the six-foot-fence section transitions down to the four-foot section.  You can see the Mason Bee House that I hung on the fence in the background and like many of the other existing trees that aren't clinging to the fence line are mostly out on islands surrounded by lawn.  If you look closely, you can see that behind the River Birch there are some taller plants that are growing and while *some* of those are weeds, there are also a series of inherited Ostrich Ferns, daffodils and some other ground cover plants.

I covered this area in a post a little over a year ago when I discovered what I then called "Survivor Ferns".  If you click over there, you'll see this same River Birch on the right side of the image.   But, it is pretty striking to see the amount of 'green' that has come in compared to just year ago.  Our landscaper sodded right up to the tree ring, so that explains quite a bit of the change, but also coupled with the fence being installed also was the likely culprit in clearing out some of the brush you see in the old photo.

The plan we have for the landscape in this area calls for a pretty large bed - extending out from the fence all the way out past the River Birch a few feet.  For now, it is grass, but over the next few seasons, we'll keep adding beds - including this one - and add additional plantings that will be anchored by this River Birch clump as it continues to grow.
#newoldbackyard #OnGrandGardens backyard backyard dreaming beds garden diary landscape landscape plan landscaping on grand gardens ostrich ferns river birch trees
Location: Downers Grove, IL, USA