Backyard Garden Walking Path - Inspiration Online (and in our Neighborhood)

Posted by Jake Parrillo on August 13, 2018
A few weeks back, we were at one of our neighbor's house for a get-together and we spent the entire afternoon out in their backyard where they have quite a large perennial garden.  I wanted to get a little closer look, so I wandered out there and discovered not only a native-looking perennial garden, but also a series of walking paths *in* the garden.  The image above is NOT their garden, but rather just some example image that I found online (source here).

The garden I was walking in (with the paths) was in full sun, so it was quite different than the one you see above, but I picked that image because it is a shade garden and more of what we have to deal with on Hornbeam Hill.  Hostas and ferns and hostas and ferns.

The path idea really struck me and made me think about our own landscape plan.  I've showed a bunch of cuts/selects of our landscape plan here on the blog, but none of them had a 'walking path'.  It wasn't even contemplated by our landscaper.  Mostly because I never really thought about it.

But you know what?  It is totally something that I want now.

For the record, here are all of the different cuts of the landscape plan that I've posted:

The example photo that gives you a feel for what is possible.  Our neighbors had redish ground material for their paths, but I *do* like the silver/grey vibe that the sample gives off.  Very serene.  Not to mention the wandering-nature of the path and how it allows for you to really take in garden.

But, where could we do something like this?  Our yard is good sized, but it isn't HUGE.  However, I do think there's a good place for at least a small walk:  on the north side from the mighty oak all the way back to where I'm thinking we're going to place our raised bed vegetable garden.  See below for the approximate path: 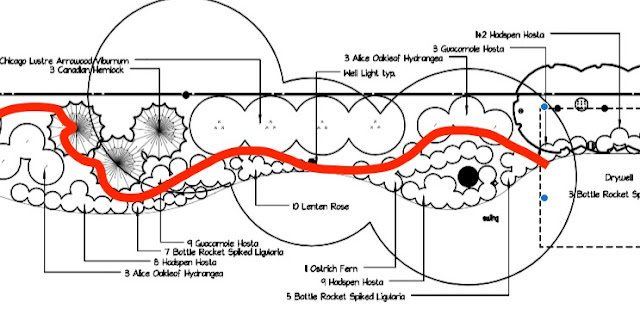 There are a few existing trees over there that are represented on the plan and a bunch of plantings that are in the shade of those trees like hostas and ferns.  I like how there's a bench in the background of the example photo as a sort of 'destination' for the walk.

We're thinking of making a second patio area that will (right now) start down by the right side of this cut of the plan.  So, the 'path' - as it were - would kind of "start" from there and then allow you to wander back.  The raised bed garden would provide a destination, but so, too, would a water feature, right?

Looking at the example photo, I figure the path is about 30" or 36" wide, right?  This piece from the WaPo says that paths need to be 24" wide minimum and 48" if you want two-way circulation.

I don't ever envision two-way circulation, but I *could* see our kids using the path - if it connected around - as a sort of 'track' for their bikes and such.  That could be awesome and reminds me of some of the best times I had during the Summer in my childhood when we made 'paths' in my parents backyard to ride our bikes around in every day.   We totally destroyed the natural ground-cover and even knocked down some small trees to make our paths - and bike jumps(!) - and it was totally worth it.1  My parents allowed it to happen and by the time I grew up, the forest recovered.

If we see the kids using the paths as a play path, then I think we'll have to consider the material we use - too light and it will get spread all over.