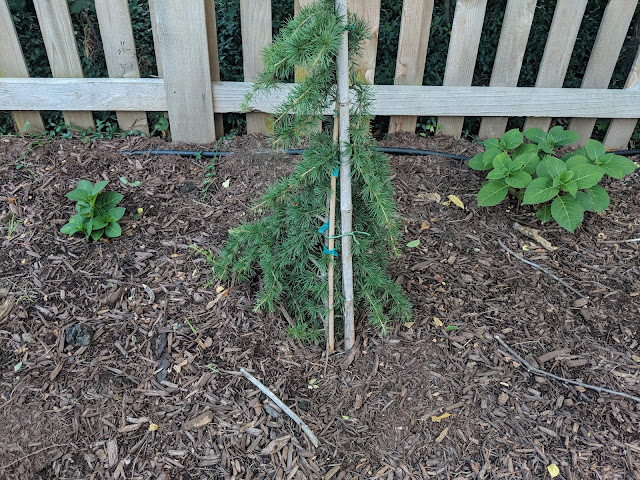 On the left, you can see the tiny Everlasting Revolution Hydrangea plant that I put in last fall.  I showed an early Summer view of this thing when it was barely poking out of the mulch.  This one has always been smaller and a bit behind the other one.

That one on the right is the Tuff Stuff Red Hydrangea that went in on the same day.  I posted an early June photo of this one, too here on the blog.

You can see the difference in these two, but also, if you look back at those posts I linked above, you can get a sense for how these have grown over the past two months.

Also, in the middle of this photo is my Weeping Cedar.  I planted this tree in May and it seems to have established itself a bit and hasn't experienced any needle drop like, ahem, other trees.  I cut off the top of the tree in this photo, but you can get a sense for the limbs that it has added and how it appears to have bulked up a bit.

Back to the hydrangeas, though.  You'll note that NEITHER of them have flowered.  Or are even showing any signs of flowering.  The Tuff Stuff Red on the right appears to have established a stronger root system and has grown both up and out.  While the Everlasting Revolution on the left, while smaller appears healthy.  I'm hoping that all of the root development that is taking place below the mulch is just helping the plant to establish itself.  Remember...sleep, creep then leap.  Since these went in VERY late last year (October), I'm thinking that this could be considered either year one or year two.  Sleep or creep.  Next year, we should see either a leap (would be awesome) or more likely a creep.

As for pruning, the instructions seem to be the same for both of these.  The Tuff Stuff variety requires no pruning and flowers on both new and old growth.  Everlasting Revolution is much the same with little pruning required and flowers on old growth.
#hornbeamhill backyard cedar trees garden diary gardening hornbeam hill hydrangea landscape beds weeping cedar