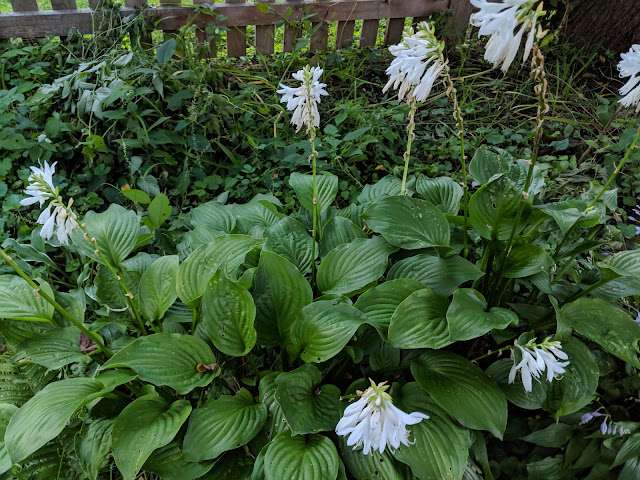 I've written about hostas on the blog here than maybe any other plant in the garden.  And I've even disclosed why I think I love these things:  my mother and her willingness to toil year-after-year in our super shady, forested yard where the only thing that grew were hostas.    Today, I'm sharing this photo of some hostas that are blooming these spectacular white sets of blooms just in time for the fall season.  I took this photo back in August, but just getting around to posting it now, so if I look back at the garden diary in the coming years, note to self:  August photo.

These are simple hostas - not variegated or particularly large.  I also know where they're from:  In the last few weeks before we tore the old house down on our lot, I went over there and dug out a bunch of hostas that were in the front yard and just kind of threw them down in the backyard - in an area that I thought was past the far-reaches of the construction fence.  I put them down in the same general location as our first Dawn Redwood.  There's some shade, but it it is mostly a part of the yard that I haven't gotten to yet.  That means that there's weeds and plants all mixed together.

Two things happened this year that caused me to pay a little bit of attention to this spot.  First was the transplanting of some of my sister-in-laws perennials from her tear down.  The second is the replanting of our replacement Dawn Redwood.  Both of those moves made me water the heck out of this area.  The benefactors?  The Redwood and some of the plants from Linscott of course.  But what else?  These hostas were babied for the hardest part of the Summer.  Nice little by-product, right?

These hostas were happy and they're paying me back with these blooms.  I now that I've documented them here in the [garden diary], I'm already thinking about what kind of role they could play in my dream garden path that circles the backyard.   I also wonder if I could ever identify these hostas.  Turns out there are dozens of varieties that bloom white flowers, so I may have to turn to the Master Gardener at the University of Illinois Extension office to help me identify these.
flowers garden diary Hostas perennials shade gardening shade gardens transplanting