A Visit to Pepe's for New Haven-Style Pizza 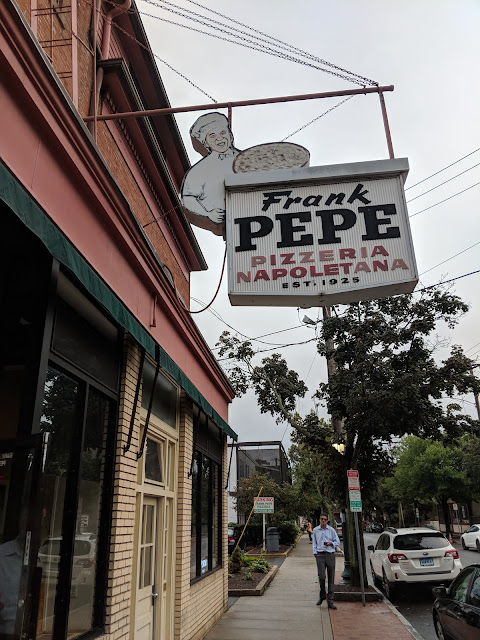 I mentioned in my post about our visit to Louis' Lunch - the home of the hamburger sandwich - that we also hit up another foodie-important stop while we were in New Haven.  That was Frank Pepe's Pizzeria Napoletana.  Or "Pepe's" as the locals call it.

There is a style in New Haven and there are a series of places that you can choose from.  According to Eater, this is serious business.


There is pizza, and then there is apizza. New Haven-style pizza is the latter; a hotter, crispier, and dirtier descendant of Neapolitan style pie. What ribs are to Kansas City, cheesesteak to Philadelphia, and crabcakes to Baltimore, pizza is to New Haven.


At the turn of the twentieth century, New Haven became a popular town for Italian families who settled in the United States during the country's diaspora. Neighborhoods such as Wooster Square became home to many displaced southern Italian families primed with palates that appreciated the thin-crusted Neapolitan style pizza of their homeland.

Here in Chicago, we have a New Haven-style pizza place called Piece - which is co-owned by Cheap Trick's Rick Nielsen - and is a place that Nat and I have been more than a dozen times.   They stay true to New Haven pizza - served as oblong shapes and in the rimmed sheet pan - so I was somewhat familiar with it.  But they call it pizza at Piece.  Not apizza.  And I'm pretty sure they don't use coal ovens there, but gas ones based on all the bragging that Coalfire did when they opened.  I covered Coalfire Pizza here on the blog all the way back in 2010.

Turns out there are a bunch of defining characteristics of New Haven 'abeets' that you can catch up on in that Eater piece.

We were in for one pizza place the night we were in New Haven, so we went with Pepe's.  Eater calls it thusly:

We arrived early at a little before five pm.  And our party of four was seated right away.  In a booth in what I think is an annex of the main restaurant.  You walk into Pepe's and there's a bar on the left, a few booths on the right and the open kitchen with the massive oven in the back.  Near the kitchen, there's an opening that takes you to the storefront that is adjacent to the main restaurant that contains booths along both walls.  We saw in the very front window-booth.

Once we were seated, I of course, got up and stood and watched the operation in the kitchen.  They have a cashier, a guy working the dough who also is (I think) the stickman.  But, look at the sizes of those sticks!?  They're about 12' long, maybe longer.  The oven is super deep.   They were doing pretty good takeout business with a bunch of folks kind of lingering near the bar waiting for their pies to be ready to take to-go. 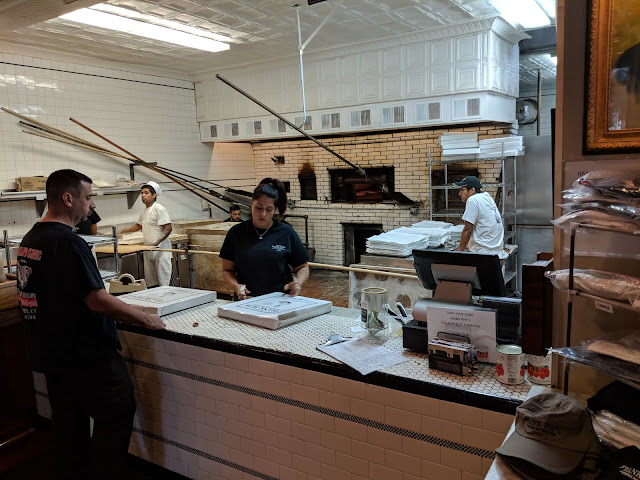 The menu is pretty straight-forward, but we were with a colleague who had spent time in New Haven before, so he ordered us three pies:  a tomato pie, a Sausage and Pepperoni combo pie and their signature clam pie with bacon. 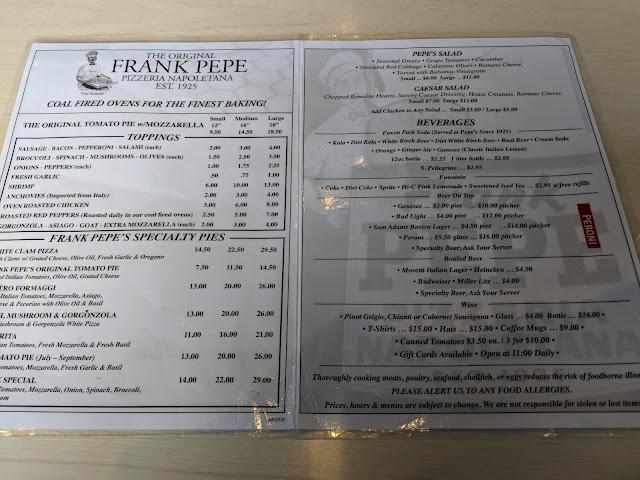 Here's a look at the tomato pie (on top) and the sausage and pepperoni pie (on the bottom).  You can see that they're kind of oblong-shaped and not cut in perfect pie-shapes.  Just peek at the slice that has been harvested from the tomato pie at the top.  Weird cut, right? 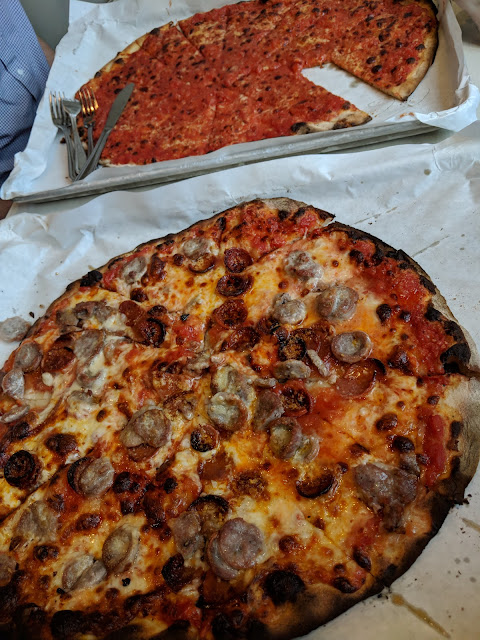 The sausage is sliced sausage, not crumbled, but it was good.

And here, below is the clam pie. 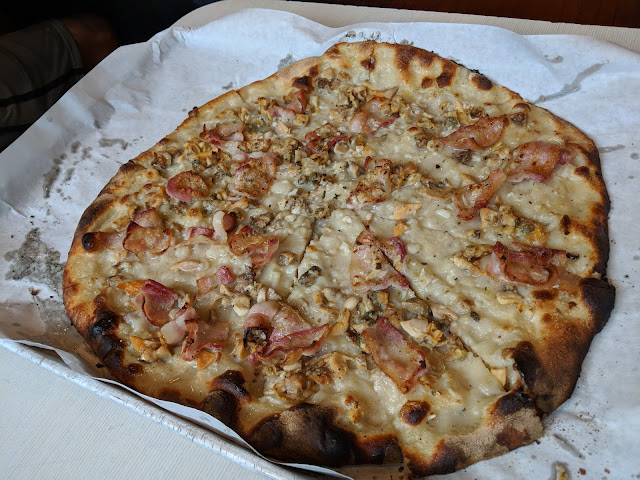 We took Eater's recommendation and amended our clam pie with bacon:


Clam pizza pro tip? Add bacon. Pepe's is known for its intensely smoked bacon, which remains pliable and similar in texture to the clams, making it an excellent partner in crime.

The bacon was certainly pliable, but I'd say that if you don't love your bacon borderline undercooked, you should ask for this pie more well-done.

As for what was the best?  I'm not naturally drawn to clams on a pizza, but after eating it at Pepe's, I understand the draw.  But, for me, the sausage and pepperoni was #1, the tomato pie was #2.  And the clam pie was #3 in rankings of preference.
apizza Connecticut New Haven pizza restaurants travel
Location: 157 Wooster St, New Haven, CT 06511, USA