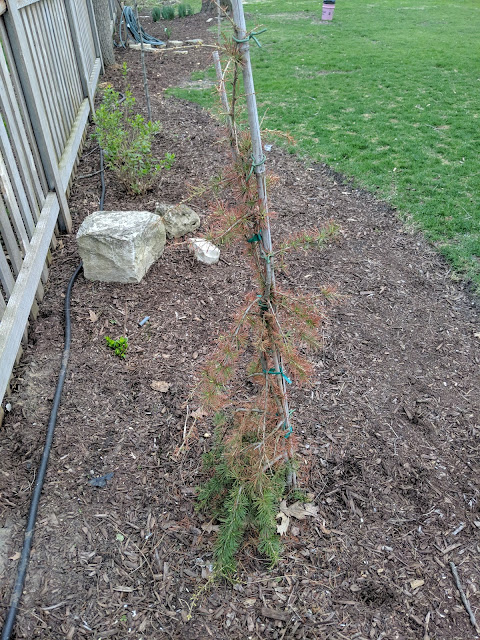 Back in September of 2017, I posted about how I had come across a photo of a Weeping Cedar and immediately fell in love with the style of tree.  It was on my 'tree wish list' for the rest of 2017 and 2018 when I found a small one at Home Depot on a random trip.  It is a Weeping Himalayan Cedar Emerald Falls variety and after planting it, I stake'd it to a bamboo rod and began to train it upwards.  By August of last year, I shared another photo of the tree that had seemingly established itself and was very green.  You can see that photo here.   I was happy with the tree and figured that we were on our way in terms of getting this thing to take off.  I even went an additional step and applied Wilt-Pruf to the Cedar to help protect it from the winter elements.

And the Weeping Cedar seemed to weather the Winter just fine.  It stayed green for the most part with some slight dulling.  Until March.  When it started to brown.  April...even more brown.  You can see it in the photo in this post.  The top has browned out while the bottom has stayed green and seemingly healthy.

The brown needles are easy to fall off if you touch them - which is a terrible sign.  But, using that "fingernail trick" where you scrape off a tiny bit of bark from the trunk/limbs to see if you see the color green beneath the bark indicates that THIS tree is in fact alive.

And there is some tiny amounts of growth that are showing at the extremities.  However, I'm still a little concerned for the tree.  A Google Search shows mixed news with some folks saying brown cedars are toast.  While, on the other hand, this post claims that a little browning in a situation like ours is perfectly natural and normal.  From Hunker:

You can expect some needles to turn brown and drop in spring or fall. This is somewhat normal during this time of year. You may also notice some dead needles on the cedar tree. Cedars do this naturally when they are young and during the second or third growing season.

I wish I saw more growth on the tips of this Weeping Cedar to be sure, but at this point, things are out of my hands.  The tree will wake up (or not wake up) on its own terms.  I'll keep an eye on it and try to grab some closer photos in the next few days.
#hornbeamhill arboretum backyard cedar trees conifer trees conifers garden diary trees weeping cedar
Location: Downers Grove, IL, USA