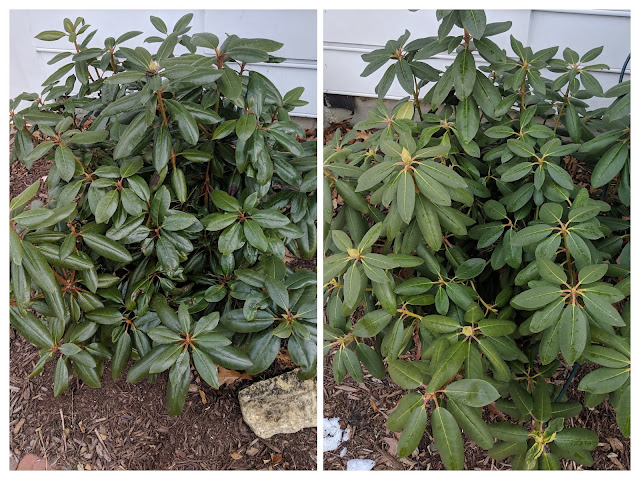 In the photo above you can see both of our Rhododendrons that flank the stoop out the back door of our family.  In April of last year, I showed the landscape plan that specified these two plants to be placed in the beds on either side of the rear stoop and then in June, I got around to actually planting them.  And they bloomed beautifully this Summer.  They're a really interesting plant/shrub because they have an almost tropical appearance but also are winter hardy here in Zone 5B.  They keep their leaves on all winter, but that doesn't mean they can't use a little bit of help in fighting off the harsh cold and ice.

And that's where something called Wilt-Pruf comes in.  Wilt-Pruf is an Anti-transpirant.  That means it helps protect plants from drying out.  We bought the concentrate version and mixed up a batch to put on some of our plants/trees.  I sprayed our Weeping Cedar in the back.  And the little boxwoods that I added near the foundation behind our kitchen.  And I even brought it down to the Christmas Tree Farm this year and sprayed both of our trees after we cut them down.1

Wilt-Pruf is a natural product made of pine oil and creates a clear, almost flexible coating on the leaves and needles.

So, back to the photo on the top of this post.  The plant on the left has a glossy coat.  The one on the right doesn't.  That's the Wilt-Pruf.  When I sprayed (via pump garden sprayer), it creates this temporary glossy coat on the leaves.  It only lasts a few months, so by Spring it will have worn off, but the hope is that it protects the plant a bit from the harsh elements.

I titled this post as an 'experiment' because I only did one of these Rhododendrons - the one on the right if you are looking out our family room towards the back yard.  Ever since, I've been second-guessing myself into wondering that since there's no harm in applying the stuff - just uncertainty as to how effective it really is - maybe I should have picked a lower-stakes set of shrubs to experiment.  I mean...these are significant due to their proximity to our house and patio.

For now, we'll have something to look forward to in our Spring garden diary entry.


1 The thought with using it on our trees was that if it is good for locking in moisture in *live* trees, wouldn't it be great at keeping the needles on *dead* trees?  It is only Dec 19th, but I have to say...either we got a couple of great trees, or the stuff just works!
backyard evergreens experiments foundation beds garden diary landscape patio rhododendron shrubs