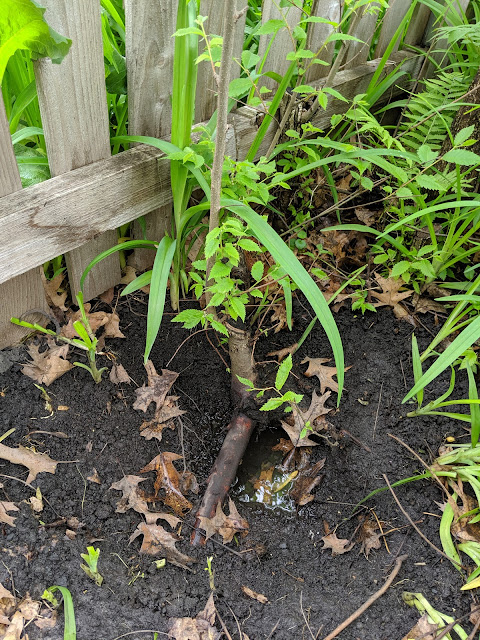 Last year, I discovered a few smallish, but growing trees that had been through some heavy pruning in our yard.  The previous owner had cut most of the little cluster of trees back to stumps at some point before we acquired the property.  Two or three of them are tall (15' or so) and I couldn't figure out what they were, so I sent a few photos in to the U of Illinois Master Gardener program.  They identified them as American Elm trees and provided some details about Dutch Elm Disease and pests that weaken these trees.

With my recent interest in bonsai including the purchase of a few pieces of nursery stock (here, here and here), I've discovered that one of the *other* ways to get bonsai trees is through the collection of natural bonsai species.  Or...what I think they call "Pre-Bonsai" species.

Collecting bonsai (or...again pre-bonsai) is about going out in nature, finding and selecting potential trees that can be dug up and potted.

I'm thinking that a few of these stumps of American Elms are good options for collecting pre-bonsai on my own property.  Check out the photo at the top of this post.  That's the American Elm stump that is short, followed by a shoot coming out of the tree.  This photo also shows how I dug up around one side of the tree and discovered this MASSIVE root.

Here is an annotated version of the photo from the top of this post where you can see the components. 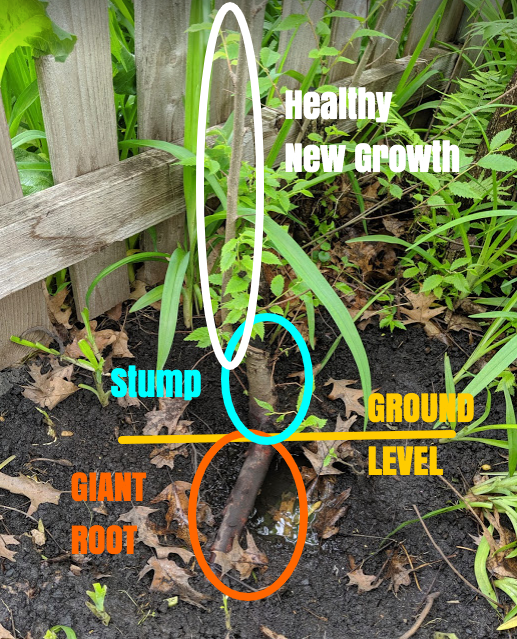 That giant root stopped me in my tracks.  I was expecting some good-sized roots (think...like half or less the diameter of the trunk caliper) and some more fine roots.  But instead, all I see is this big, giant root that is just about the same caliper as the trunk.  I was stumped.  I poked at the other side of the stump and I think I found another giant root.  Back the drawing board.   I figured that if I cut this thing out of the ground, it was destined to die.  There's almost no way that it seemed that the tree could survive with such a massive shock.

Off to the Web I went to see what people do in situations like this.

I found this story in Of Bonsai magazine by Will Heath where he talks about how he puts some of the larger trees that he collects on a three-year plan.  From the piece:

Ok....that seems to be a good plan.  Instead of massacreing the tree all in one shot, think about severing some of these large roots one at a time, allowing the tree to respond and recover in between the cuttings.

I went back out to the tree and had my large loppers in tow.  I cut the large root and took a segment out of the line of roots with the goal of trying to stimulate some new finer root development from the cut segment in to the base of the stump.  I dropped in some Miracle Gro in-ground potting soil that has food and *hopefully* is the right mix to encourage some in-close root development.

I grabbed the segment that I removed and washed it out to see what was going on.  Here's what that segment looks like: 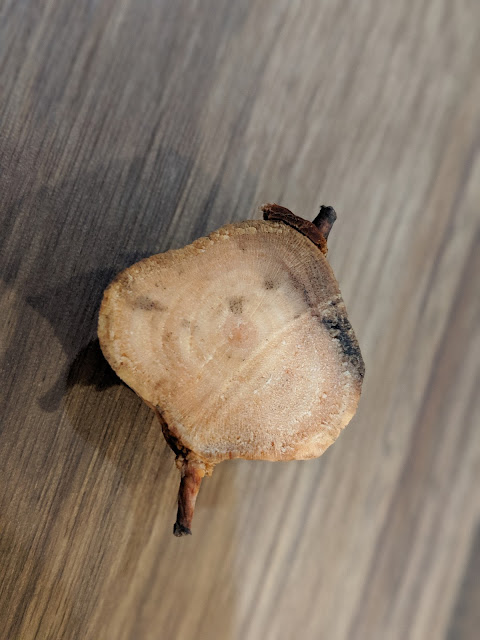 At the widest part, the root section is 1-5/8ths inches wide and by my eye's count, there are eleven or so growth rings on the root.  That means that this large root is eleven years + old, right?  Have to think that the stump is older than that, too.    My next step is to prune back some of that healthy growth coming out of the stump to encourage a little bit more bushy growth close to the stump with this one.  But, I'm also going to dig out one side of the rest of the stumps (I think there are three total) and proceed with "Year 1" digging/severing of roots on all three of them.  Then next year, we'll move to the other side of these things.  With the final digging done in 2021.  That feels like an extraordinarily long time, doesn't it?

Bonsai isn't for the impatient and having trees that grow and last for decades is how people gain expertise.  I can leave these things in the ground for a couple of years and work on other parts of the yard around them.  That's just a matter of patience.  And, besides....by 2021, I can hope that the few nursery stock items that I have picked up have survived and begun to grow larger and thicker trunks to the point that I can think about putting them into bonsai training pots.