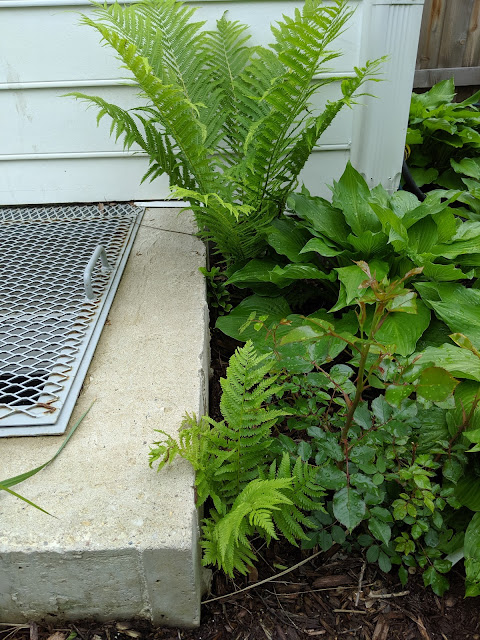 In the photo you see above, you'll see a large "vase" (at least that what I'm calling them for now) of Ostrich Ferns and if you look at the bottom of the photo, you'll see a smaller, second Ostrich Fern in the foreground.  The one at the top is what I've been calling the "Teardown Fern".  Here's a post showing this same Ostrich Fern a year ago in June of 2018.    The top photo in *that* post is from when it was just un-furling and the photo at the bottom of that the post is what it looked like in mid-June.

Here's the original post when I pulled them out of our neighbor's yard in October of 2017.  Hence...the whole "Teardown Fern" moniker.

This year, you can see that it has more fronds and is larger.  But...that's not the most important part.  That's the second fern that has popped up.  This thing has multiplied.    How nice.  These things do, indeed, multiply and I'm glad that it has matured enough to begin to spread out.

The downside is that you can see the little Disneyland Rose plant next to the little Ostrich Fern in the foreground popping up.  It *was* a good spot when I planted it, but it is becoming clear that it will be too crowded for this thing in this spot.  Will have to think about moving the Disneyland Rose this season after it blooms.  Compare this photo above with what it looked like when we first planted the rose.  There *was* plenty of mulch showing then.  Now?  Not so much.
disneyland rose ferns foundation beds mulch beds ostrich ferns roses teardown ferns