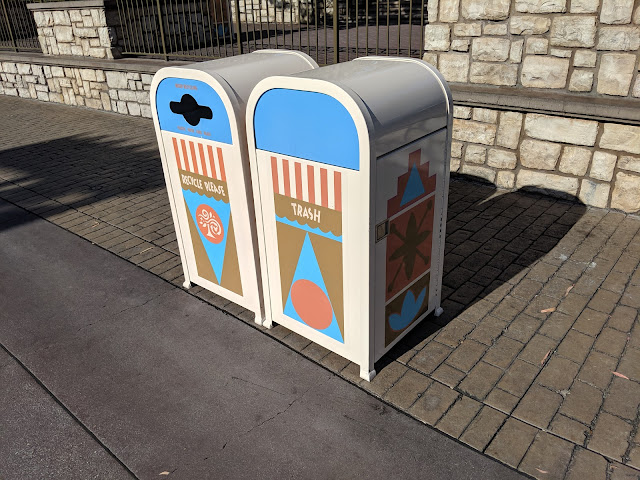 These garbage cans are just beautiful, right?  There's all sorts of Mary Blair kinda-stuff going on with them as they are lined up along the route to the ride.

I took this photo on the way to It's A Small World After All in Disneyland and you can see the little 'stage' that I mentioned in the post with the Disneyland espalier photo I shared recently.   The visual design on the cans is striking, of course.  But the whole idea of the garbage cans at Disney Parks are a concept with a huge amount of attention on them as a topic.  First...there's the notion that Walt Disney and Imagineering (or WED as it was likely at the time??), invented this 'style' of garbage cans.


As he planned Disneyland, Uncle Walt examined the trash cans of the era. They were mesh cans that had a couple of major design flaws. The first was that a can with holes in it allowed goop to seep out. Yes, gross. The second is arguably worse. A can with holes in it doesn’t block the smell; instead, it filters that nasty scene. Trash cans of the era wafted affronts to the nose as an intrinsic part of the design.

Disney had a grand idea. He developed a new style of trash can, a rectangular one with some clever additions. It had a lid and two adjoining flaps on top. The flaps locked the trash into place AND prevented the smell from escaping.

Also, you’ve seen this design many times because it’s become the basis for modern trash can receptacles. Disneyland was the first place to host them. Amusingly, Disney allegedly presented his idea to trash can manufacturers of the time and was rejected. Yes, Walt Disney apparently revolutionized the trash can, but some short-sighted trashcan executive turn down a deal with him. For this reason, Disney never patented his idea.

The design that we see everywhere - including at McDonald's with the 'swinging door' was first put into practice at Disneyland.  Incredible!

There are lots of people who chronicle the cans like this piece on Medium.  And just Google the phrase [Disney garbage cans 30 feet] and you'll come up with tons of stories about how Walt himself insisted that the cans be that distance.  There was a garbage can animatronic at Walt Disney World (never saw it myself!) named Push.  And...there are even a series of salt and pepper shakers that are in the shape of Disney Parks garbage cans.

As it relates to IASW here on the blog, besides the recent espalier post, I have also posted a photo of a Mary Blair-inspired Disney pin.   And the original ride poster is included in the wallpaper in the restroom of one of the towers of the Disneyland Hotel.  I thought I posted about Mary Blair more than I have, but either the search function isn't working right...or...I'm simply mistaken.