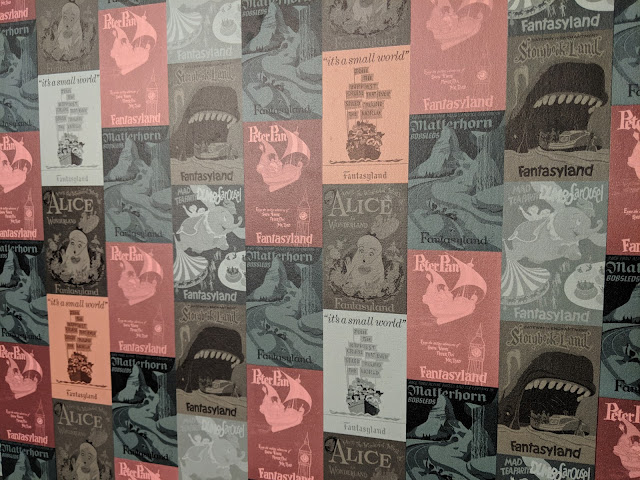 Why not make the bathroom awesome, right?  That's what, I'm sure the Imagineers said who were putting the final touches on the Disneyland Hotel.  As I've mentioned before, you should - if you can swing it - stay there on your visit to the Disneyland Resort.   Most recently, we failed to take my own advice and stayed at a "Good Neighbor" hotel (c'mon...let's be honest here:  it was a motel).

To make-up for our staying outside the 'Disney Bubble' and to kind-of recreate a special character meal we had a few years back, we booked a breakfast at Goofy's Kitchen.  The restaurant is in the convention center building that is right next door to the Fantasy Tower.  Here's a map from the OC Register that shows the Disneyland Hotel footprint.

That photo at the top is what is hanging on the walls and features some original (I think??) attractions of Disneyland Park including It's a Small World, Alice in Wonderland, The Matterhorn Bobsleds, Peter Pan's Flight, Storybook Land and a combo of the Mad Tea Party, Dumbo and the Carousel.