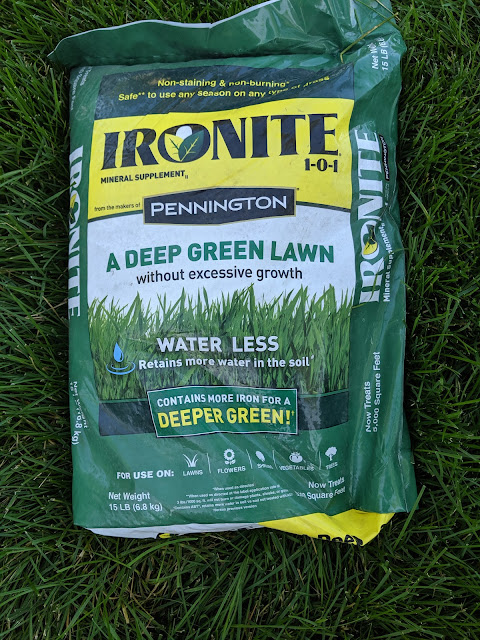 A week ago, I posted some photos of my yard as a way of documenting where I was in the lawn care Summer process and talked about how it was a mixed bag:  the turf appears green to the eye, but when you look closer, it appears that there's some 'melting out' or leaf spot or something else happening below the surface.  Before I post about what I ended up using to try to cure (and, potentially....prevent) that, I wanted to get in the [garden diary] a post about Ironite.

I've now put down two treatments of Ironite this season with splitting a bag on the front yard with the first 1/3rd of the backyard.  I put the first one down around Memorial Day and just put the second one down in early August.

What is Ironite?  Well....it is 1-0-1 lawn fertilizer.  But, I think of it more of as a color-agent.  From the Pennington site comes this description:
The basic premise is that it will, as it says above:  "turn yellow to green".    The application rate is light (think:  setting your normal Scott's spreader at like 3), so you don't put down a ton of this stuff.  What's interesting is that if you do a quick Google search for [Ironite], you'll see that there's some debate about if the stuff is harmful.  But, it turns out, the formula has changed since that debate in 2005 to 2008.  From this Las Vegas Review Journal column, Bob Morris tells his readers the facts on Ironite and how it is not-harmful:


The current Ironite products are totally different from the original Ironite product but carry the same name. Ironite was, and still is, a soil amendment/fertilizer used for correcting yellowing plants growing in alkaline soil.

...The original Ironite product came from recycled mine tailings. These tailings also contained heavy metals — lead and arsenic being the two that got Ironite into trouble. There was a long controversy regarding whether the lead and arsenic were problematic for food crops.

...Ironite is now owned by Central Garden &Pet Co., through its subsidiary, Pennington. It is a totally different product from the Superfund site days but carries the same name. Because of its industry reputation, a line of products carrying the Ironite name has evolved.

In a nutshell, Ironite is not the same product as it was years ago. The EPA allows the label to include application to food crops.

If it is safe for crops, it is safe for lawns and turf.  I've been down this 'safe for crops' path when thinking about planter boxes for a garden.  The idea of using treated lumber for raised gardens is chocked full of debate about how safe it is for things you eat.  This felt similar, but we're, umm....not eating the grass.

This is one of a few fertilizer/turf-building products that I've used for the first time this season. I'm happy with the color (as seen last week here), but I don't know *exactly* why it is greening-up.  Is it the Milorganite?  The Humic Acid?  The pelletized gypsum that I put down last year to help with the clay soils?  The Ironite?  All of them?

The bag says that you can apply this stuff up to 10 (ten) times a year.  (or...at least according to this post, "not more than 10 times a year").  I'm at two times and if we can make it through the heat of August, I think we'll be on the downside of the browning out.  Oh...and if the fungicide that I applied (more on that soon, I promise!) attacks the melting out/leaf spotting, I might even end up with a deeper, richer green lawn.
#hornbeamhill #lawngoals fertilizer garden diary Ironite lawn lawnnut soil amendments
Location: Downers Grove, IL, USA