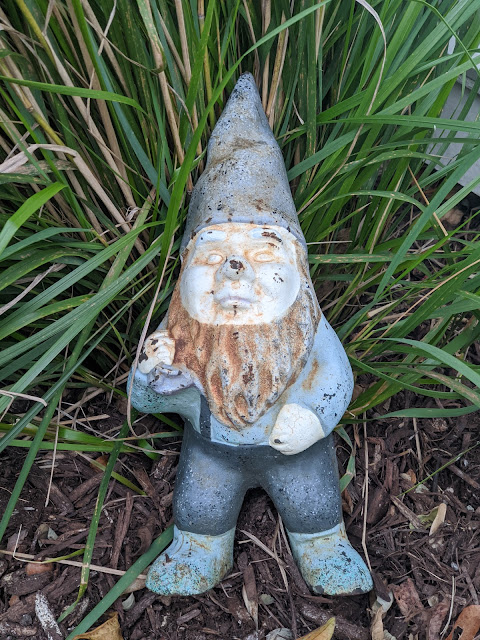 I've posted a few times about various garden gnome dreams that I've been having this year, but I also have an existing cast iron gnome that has taken up home in our backyard in Downers Grove.  This photo was taken a few weeks back in early November.  Getting around to posting him with the Thanksgiving slowdown.

It seems that the last time this particular garden gnome made an appearance on the blog was back in 2014 when I used him as a comparison of a pumpkin that I grew that season.   I'm not totally certain when we bought him, but I'm pretty sure that he is from Target and that Nat (and/or the kids) bought it for me for Father's Day one year?

In the five years since he last appeared, you can see that his paint has worn a bit, his pants have gone from a dark green to an almost grey.  His boots from a nice green to a faded, light green with some rust parts spotting through.  His hat - which was once red - is now just a light grey.

He's also added a bit of rust patina all over him, but most significantly on his long beard

The most striking change from 2014 is his eyes.  Then he had eyes and details around the pupils. Today?  He's dead in the eyes.  They're not there any longer.  Well...the shape of them is there.  But, the details?  Gone.

I don't think this gnome has a name, but he still looks good to me.  A little bit of age and patina are what I want out of cast iron gnome, right?

He's now left outside all year around - guarding and inhabiting our backyard.  Why?  Because we were told that a garden WITH A GNOME is going to be:  stronger, more healthy and help make us all smarter.
#hornbeamhill garden diary Garden Gnomes
Location: Downers Grove, IL, USA