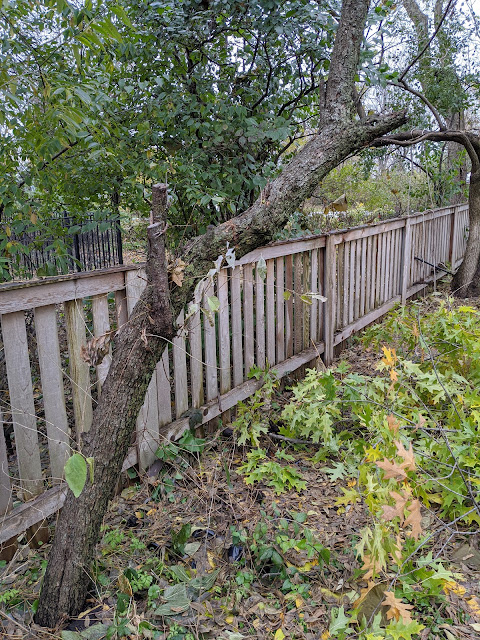 Last September, I posted a series of photos showing how I was taking down a Buckthorn tree in the far reaches of our backyard.  It was a small tree, but took some time between cutting and digging out the roots.  I mentioned that I had a few more Buckthorn trees around - and because they're an invasive tree - I wanted to get rid of them over time.  In fact, I included 'Buckthorn removal' in my 2019 To-Do List addendum and didn't get around to taking down any of the trees this Summer.

That changed this past weekend, when I was out back and tried to take on this tree you see here.  This is a medium tree, but it is in a state of both alive and dead - at the same time.  I know that seems strange, but I'm pretty sure that the main tree is dead, but the suckers on this thing keep coming back, so there's life in there somewhere.

I first started with sawing off a bunch of the limbs.

Then I cut it in half - and let the top-half tumble down into the bed.  In the top photo, you can see a bunch of green Oak leaves (more on that in a future post):  that's where the top half landed.

I then turned onto the bottom part.  I just used some pressure and tipped the trunk over and it yanked itself out from the ground. 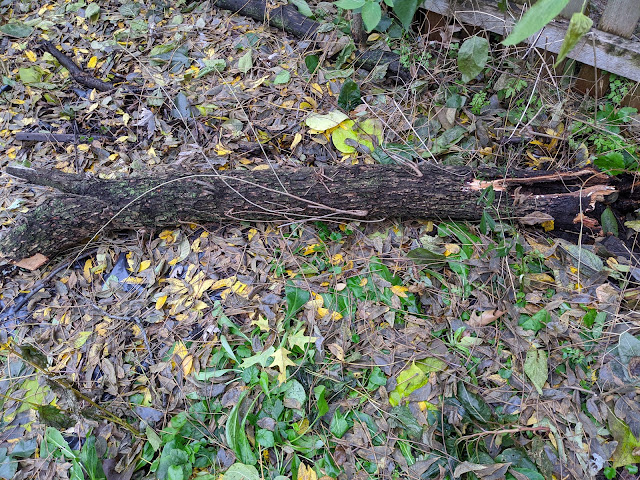 Here's the bottom part - the trunk - with the base that had rotted out quite a bit on the right side of the photo.

There are a series of Buckthorn trees in the easement behind our fence, but they provide some screening, so I'm not going to deal with them just yet.

With this one gone - coupled with the loss of both the Weeping Cherry and the Corkscrew Willow, there is room for a couple of trees that I can plant next Spring.  This is about ten feet or so to the south of the Red Maple Sun Valley that puts on a nice show in the Fall.

Maybe a couple more of those Fall-show-y Maples?  That would be a nice look across the back.

Or...maybe this is a spot for something new?  A Ginko?  Maybe even the columnar Ginko from this post?    I also really LOVE the Dawn Redwood that grew 3' this Summer.  Maybe one of those back there would be a nice 'fill' and 'thrill' tree?

But, what's that you say?  We have a landscape plan?  Oh, yeah.  We do!  Why don't we look back at it to see what the pros have spec'd.  Turns out, there's no trees back there.

Here's the section where this Buckthorn was located (note...it was to be removed): 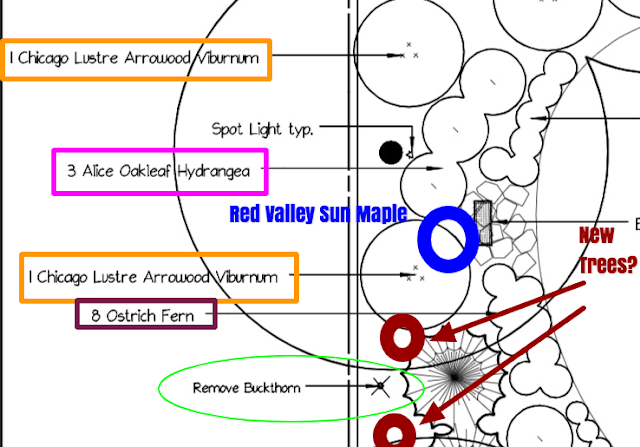 I've put the two tree locations in dark red in the bottom.  Could they go there?  I suppose so.  Also, note that the plan calls for two Arrowood Viburnum on either side of a large Catalpa tree that is back along the fenceline.  And three Oakleaf Hydrangea.  Both of those are good in the shade and something that I should be adding to the to-do list next year.  I can buy small versions of those five plants next year and over time, they'll grow up.  Also, note that these are now ALL behind the yew hedge.  That means that as the yews grow taller, the viburnum and hydrangeas will have to grow-up, too, to be 'seen' from the house.

Also...thinking about NOT in the bed you see above, but rather closer to the hedge could be another place for those trees - to help create a sense of place as that 'path' part comes into focus.
#hornbeamhill backyard buckthorn garden diary landscape plan tree removal trees