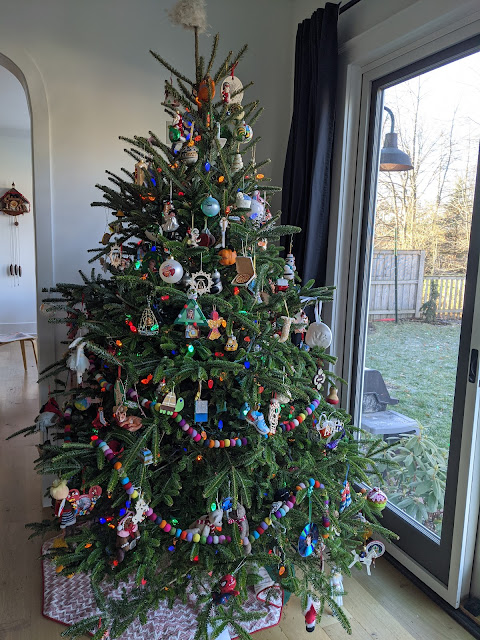 Like the past few years (and since we moved to Downers Grove), we have two Christmas trees up in our house for the holiday season.  Nat is in charge of the decorating of our house and she does a really amazing job creating an environment that balances nostalgia (with some vintage things that we've both collected over time), personal touches (lots of kid-made things around) and new, joyful decorations.

I'm one of the benefactors of her work and thoughtfulness with Christmas decorations - along with the kids - and grateful for her effort to create a "place" that will be full of memories and meaning for the rest of their/our lives.

But, like a lot of things in life, Nat doesn't over-do-it.  In fact, I think we've/she has managed to peel back a bit in the past few years.  Thinning out some of our Santas that we've bought at various estate/garage sales.  Dropping off decorations at GoodWill for another family to use.  And just trying to simplify things.

As part of that "simplifying" of things (and to reduce the stress of trying to find a big tree on the farm), we decided to change course with our Christmas tree(s) this year.  I shared a preview of this back in the end of November when made the decision to get ahead of Thanksgiving and went to Wannemaker's to buy a tree from their greenhouse.

In the photo at the top of this post, you see the fruit of that decision.  A really beautiful Fraser Fir that is VERY full, shaped like a tree should be and fits the space we have for the tree.

Our ceilings are ten feet tall and with the angel up on the very top, it still doesn't come close to scraping the ceiling - I'd say the top of the actual tree is about 20" away from the ceiling.  So, let's call this a 8.5' tree or so.

As for me considering this tree to be 'full', just compare it to the photo of the tree from last year - one we cut down from Tammen Tree Farm.  Pretty significant difference to my eye.

I've posted about our Christmas trees since 2010.

As for species of trees we've had, here's the list (starting with the oldest first):

That's twelve trees that I've posted about on the blog. Three of them were Douglas Firs. Nine have been Fraser Firs.  That's 75% of the time = Fraser Firs - which I think is the most common tree out there, right?  I'll post about our Green Room tree from this year and tip the scales further in the Fraser Fir-direction before the year is out.
christmas christmas tree family room fraser fir wannemakers
Location: Downers Grove, IL, USA