Owl Spotted In Our Neighborhood - January 2020

Posted by Jake Parrillo on January 26, 2020
We have an owl that lives on/around our block. He's been around for a while and we hear him hooting in the overnight hours during the Summer when we sleep with our windows open.  In fact, I'm pretty sure that there are/were multiple owls in the neighborhood.  I've heard them call and respond.  Maybe Momma and babes?  Or pairs/partners?  I don't know.

Our neighborhood is called Randall Park in Downers Grove and has a large pond at one end of it and a creek running through one side of it, so we have plenty of wildlife.  And we're doing our part by participating in the 'Certified Wildlife Habitat' program from the National Wildlife Foundation where we've provided the necessary components of food, water, places to raise young, shelter and some sustainable practices like composting and what-have-you.

So, it is a good spot for something like a family of owls to make a home around our block.  They have plenty of water, large, mature trees for shelter and plenty of other wildlife to feed on like birds and rodents.

But what kind of owl do we have?  According to the University of Illinois Prairie Research Institute, we have four owls in Northern Illinois:

I watched this Owl calls video from the Cornell Lab of Ornithology and I've eliminated:

And based on this video, I've eliminated the Screech Owl.

So that leaves the Great Horned Owl (hoot owl).  This video plays the call that is familiar to me.

Pretty neat, right?  We have a Great Horned Owl (or more than one) in our neighborhood.  Based only on the sound I've heard over the years.  The Great Horned Owl is a pretty awesome creature.  From the Illinois Raptor Center:

Great horned owls are the largest and most fearsome of the owls found in Illinois. They are powerful hunters that will eat almost anything, from insects and birds to squirrels and skunks. Anything it can catch and carry away is fair game.

So...back to our owl - which I'm pretty certain is a Great Horned Owl.


Here's a video I took from August of last year of me capturing him/her 'hooting'.  It was clear as day live there on the street.  But, alas, the audio on the video is faint.  Pay attention at the :39 second mark.  And turn up your volume all the way.  Hooting.

Then fast forward to last week when I was walking to the train in the early morning hours.  I heard the hooting in the block just north of us.  And sure enough...I was able to spot somebody.

Here's the long-view (thanks to Google Night Sight) of the owl perched in a large tree.  Can you spot him? 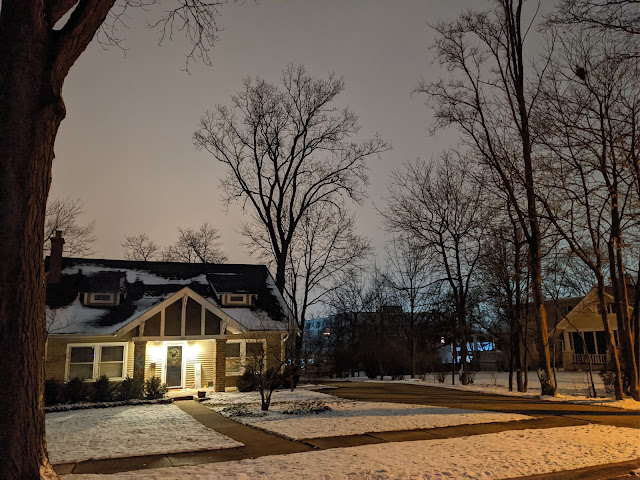 For a really large version of the photo above, click here to see it on Google Photos.  You can zoom all the way in to spot him on the tree that is just over/to the right of the roof of the house with the lights on.  Third major branch going up.

And, here he is zoomed in. (Again...thanks Google Pixel Night Sight.) 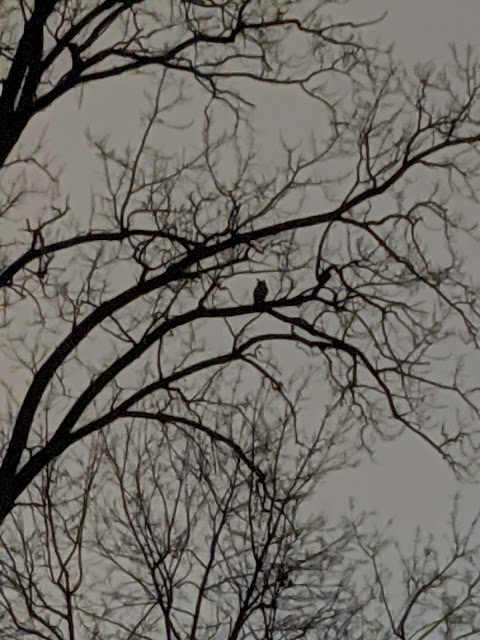 Pretty awesome to finally spot him.  And to confirm that he's a Great Horned Owl.  I'm going to share the details of what kind of owl we have with the kids and dig in on getting to know our resident flying predator.