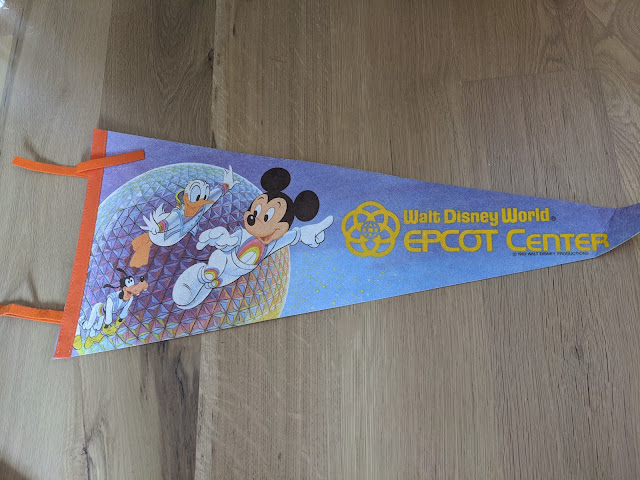 A few days ago, I posted a photo of a vintage University of Illinois Fighting Illini football 1984 Rose Bowl felt pennant and remarked that it was from my childhood.  It was (somehow??) saved by my mother who packed it away with a bunch of other things from my life.  When my folks moved out of their house in Frankfort - and we moved into our home in Downers Grove - they gave me a bunch of boxes and tubs loaded with personal effects.

Along with a collection of greeting cards from my First Communion and sports trophies, these pennants were stuck into the boxes.  There are a whole bunch of them that I'll get to, but today's post is about this epic, vintage Walt Disney World Epcot Center spacesuit felt pennant.

It features Mickey, Donald and Goofy all in their 'Rainbow Brite' costumes and this one, too, I remember from my childhood.  I'll have to ask my mom if she has any memories of when we got this, but it seems that this *has* to be from the 1980's, right?  The copyright on the pennant reads: 1982 Walt Disney Productions.  Could this be from 1982 when the park opened?  The park opened on October 1, 1982, so that leaves a pretty tight window to visit in that year.  But, maybe we went in Spring of 1983?  That would have made me five years old.  Would a five year old want a felt pennant?

Based on a little bit of surfing around the Web, I can narrow it down from 1982 (when the park opened) to 1994 (when they changed the name of the park from Epcot Center to just Epcot).  Would they be selling a pennant with a copyright date of 1982 in the late 1980's?

There's a lot to love about this - including (of course) the rainbow space suits on Mickey, Goofy and Donald.  But, also the image of Spaceship Earth, the original Epcot Center logo and font and the little orange tassels on the wide end.

This is the second vintage Disney pennant that I've posted about here on the blog.  We have two of these vintage Disneyland pennants - one that is on our pin board and one that will go in the KotBT's room.
childhood disney Disneyana epcot EPCOT Center florida pennants vintage vintage disney walt disney world wdw