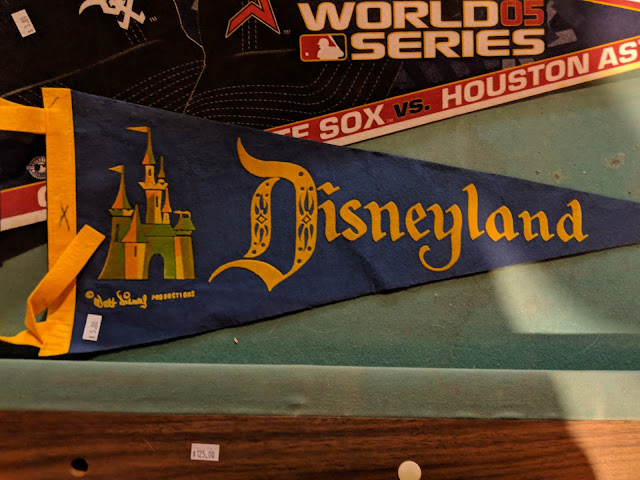 I went to the Estate Sale that I've posted about recently on a Friday morning and took some photos of things that I've posted about here on the blog.  All of them, I was at least *comfortable* with passing on after saying my mantra to myself.  But there was one item that I wondered if I should go back for:  this Disneyland vintage felt pennant from Walt Disney productions.  After showing it around to Nat and her family, it seemed like I was drawn to this.  You can see that they were asking $5 for it on Friday - which I think (for me at least) is too much.

But, I went back Saturday knowing that they'd have 50% off of everything and more willing to deal.  The pennant was still there.  Marked down that 50%.  But, I offered $1 and they took it.

And now this vintage pennant from (what I think is) the 1960's is hanging in some of the blank space of my Disney pin boards hung in the garage.  I just tacked it up there for now to keep it from getting creased and folded, but I don't intend to leave it there.

Why?  Because I have a few more pennants that I want to hang.  As part of my parent's Estate Sale a few years ago, I grabbed four of five pennants from my childhood that I have down in my work room just hanging out.  I think there are a couple of old Chicago Bears ones at at least one Chicago Sting one that I *totally* remember hanging in my bedroom when I was a kid.

This Disneyland one will go right next to those.

Just from a quick look in the archives, I think this is the fifth piece of "Disneyana" that I've picked up over the years and posted about on the blog.  Well...four that I bought.  One that I had since childhood.