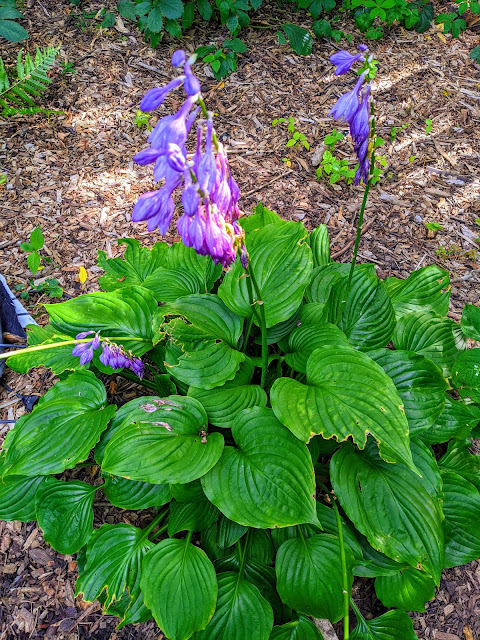 This hosta is planted in the far back of our property - where I put down a base of wood chips earlier this Spring.  Based on where it is planted and how it is pretty unique in color/texture from the rest of our hostas, I'm thinking that I dug it out of Nat's sister's lot before she tore down her house.  Here's a photo of a garden cart full of stuff that came from there.  I don't see any hosta leaves in the photo, but I, do, mention them in the post.  I also mention ferns in the post and I know the "teardown fern" that I post about is from her lot - and it is adjacent to this hosta.  Hence...my pretty strong suspicion that it came from across town.

In terms of gardening debate, I think that hosta flowers might be the 'hot button' between Nat and myself.  They are something that she just doesn't care for.  Me?  I love them.

Now, I can't be certain, but I'm pretty sure why I love them goes back to my Mom.  And my childhood.  I posted about my Mom being a shade gardener here on the blog - and toiling away with hostas as her primary perennial.

What do I remember about them?  Besides her working to split them every few years, I remember trying to "time" the blooms so I could 'snap' them between my fingers and have them make a little POP sound.  Hosta flowers take me back to those moments, I guess.

But, what kind of hosta is it?  Thanks to this handy-dandy page on the Delaware Valley Hosta Society's site (who knew there was such a thing?!?), most 'unknown' hostas that people have are able to be narrowed to their list.  Which includes "H. ventricosa":


The Dark Green One with Purple Flowers: H. ventricosaThis one also has shiny heart-shaped leaves that almost glitter. The flowers are a deep purple, and will make lots of seed pods. This hosta is easily spread by seed, so is the most likely choice if you find a hosta growing in your woods. Can also grow to 30" across or more.

Seems to check all the boxes in the photo, no?  This page on the Hosta Library gives more details:


ventricosa became known to European naturalists traveling in China during the latter part of the 18th century. It is native to China and northern Korea. One of the first hosta species to be grown in Europe it was imported to England in 1790. It did not receive its modern species name until 1931 (Stearn). It has widely bell-shaped purple flowers and dark green shiny leaves and makes an excellent landscape hosta.

Might be time to split this one up into a couple of clumps and get a pattern going out back.
backyard garden diary Hostas shade gardening shade gardens teardown hostas
Location: Downers Grove, IL, USA